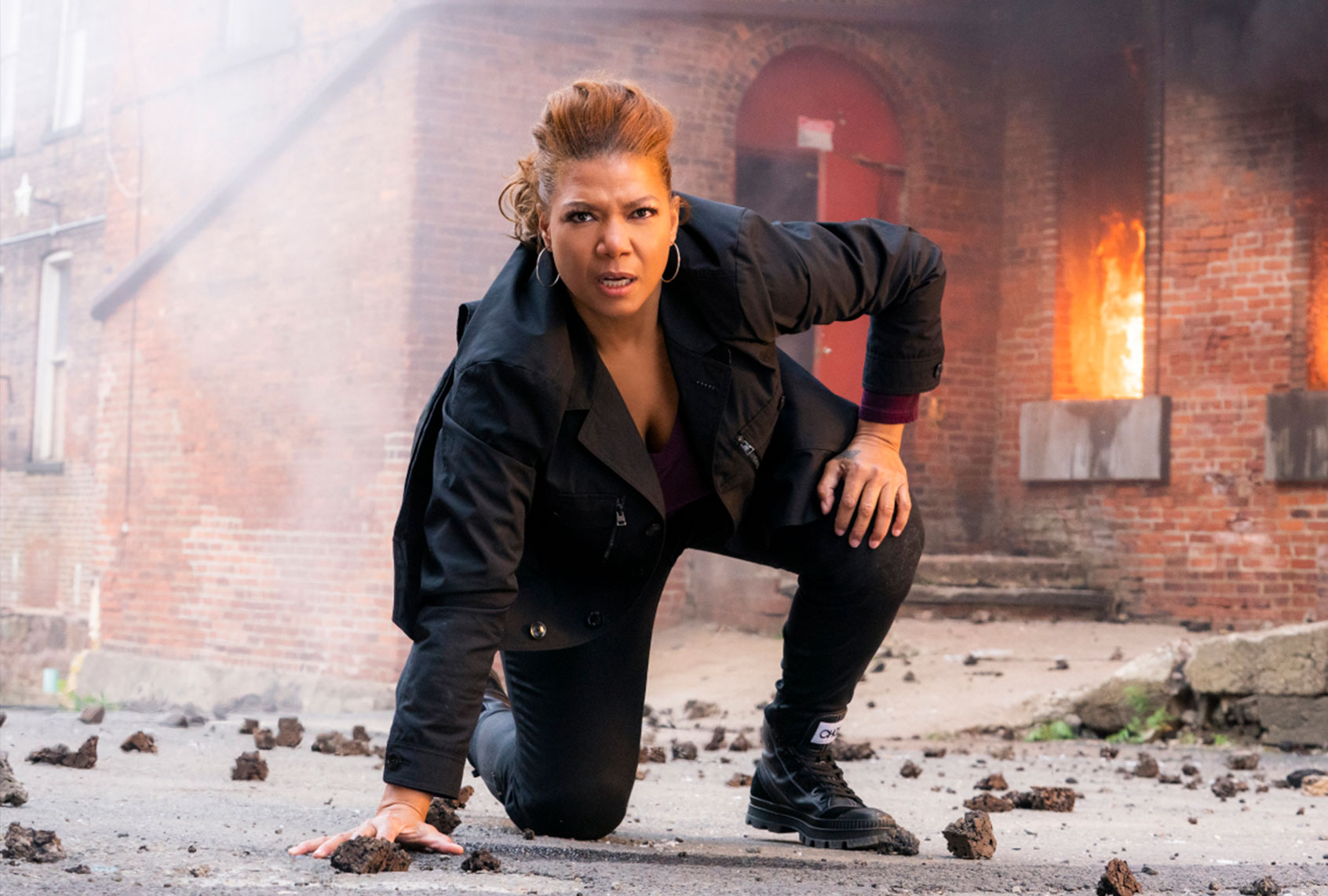 Strip down “The Equalizer” to its bones and the reboot debuting Sunday after the Super Bowl isn’t very far removed from the original series, which aired between 1985 and 1989. The story still follows the exploits of McCall, a former covert operative turned guardian angel for the poor and exploited. It’s still a simplistic action-heavy spectacle that isn’t shy about showing its heroic protagonist use any means necessary to protect the downtrodden with nowhere else to turn.
Only now, in 2021, the hero goes by Robyn McCall, not Robert, and is played by Queen Latifah instead of a steely Brit.
Latifah is stepping into an arena already traveled by other Black actors by playing a legacy role originally played by Edward Woodward. The popularity of “The Equalizer” is modest compared to, say, James Bond . . . although series co-creators Richard Lindheim and Michael Sloan were obviously influenced by the iconic spy when they dreamed up their original vigilante.
But if Bond fanatics flipped out at the news of Lashana Lynch assuming the 007 designation for the upcoming film “No Time to Die,” history and knee-jerk habit tell us that some portion of the TV viewership will balk at seeing a Black woman in this role. Bet on it, even though McCall has already been resurrected by Denzel Washington, Black man.
Presumably more people will welcome the chance to watch a female “Equalizer” at least once than who will dismiss it out of hand, if past instance of bigoted outcries from pop culture fandom tell us anything. The very fact that this is a possibility is a strange factor to contemplate in the direct wake of the presidential election and the subsequent inauguration of the first Black and Asian person, also a woman, to the vice presidency.
Only recently the super-heroism of Black women was celebrated far and wide, making a show like this a natural extension of the cultural zeitgeist. CBS is smart to add this title to its list of reboots for the name recognition alone, and savvy to make some noise by casting a woman in a role that under the network’s previous regime certainly would have gone to a man. For the record, at a recent virtual press conference hosted by the Television Critics Association, Latifah shared that she and the producers received Lindheim’s blessing before he died a few weeks ago.
Unfortunately ignorant reactions to such character revamps are also typical enough for us to at least brace ourselves for impact.
The good news is that Latifah isn’t stepping into the boots of a comic book superhero. You may recall that ethno-purists within those fandoms flipped out over Zendaya’s casting as Mary Jane in 2017’s “Spider-Man: Homecoming” and more recently, trolled Javicia Leslie when she was announced as the new “Batwoman.” Her character Ryan Wilder took over the cape and cowl from Ruby Rose as of January; Rose left the CW series at the end of the first season.
Not long before that, Anna Diop drew frightening levels of harassment when DC cast her as Starfire, an orange-skinned alien, on “Titans.” The series is heading into its third season and Diop is still a part of it; plainly producers were not deterred.
Other series and films built around Black women superheroes like Regina King in “Watchmen” or Kiki Layne in “The Old Guard” have been embraced and celebrated by critics and the broader culture. The distinction is that those characters were originally conceived as Black women, much like Blackbird and Lightning in The CW’s “Black Lightning.”  Also these characters along with Batwoman and Starfire are pure fantasy. Some can fly. Others have bulletproof suits and endless funding from secretive billionaires.
Spies and former special ops agents of all different backgrounds actually exist in our world, however. They walk among us. That very reason lends McCall to a gender flip more easily than other fictional crusaders.
Plus, Latifah herself is believable as an action star. In the past she’s trained in kickboxing and rides motorcycles; both skills come into play during the pilot. She’s also tall and physically formidable, meaning nobody could rightly question how her McCall would be able to knock out an opponent. She’s also a familiar face, having worked every corner of TV for decades, from sitcoms to talk shows to a Cover Girl spokesmodel contract. For the same reasons Denzel Washington picked up “The Equalizer” and ran away with it, it’s not hard to envision the audience buying her as the lead here.
Latifah’s starring role in “The Equalizer” highlights a rarity in broadcast television that should not be in this day and age: she’s only the fourth black woman in the history of medium to lead an hourlong drama on NBC, CBS, ABC or Fox, following in the footsteps of “Get Christie Love!” star Teresa Graves, “Scandal” lead Kerry Washington and Viola Davis on “How to Get Away with Murder.”  (That list is growing and will soon include a planned series about Tony Stark’s protégé Ironheart featuring Dominique Thorn as Riri Williams.)
It’s too early to predict whether “The Equalizer” reboot will enjoy the same longevity as Washington’s and Davis’ shows. The original aired for four seasons, and the first episode of the revived version is a very standard CBS crowd pleaser. Other reboots that have run for multiple seasons had less exciting launches.
Complaints about any new series are inevitable, because few pilots are perfect and most are simply serviceable. Hopefully any knocks this new “Equalizer” sustains are for reasons other than the star’s gender or her Blackness, because neither of those traits have anything to do with how effectively she can fix a common person’s problems or beat the odds against them.
“The Equalizer” premieres on Sunday, Feb. 7 on CBS immediately following the Super Bowl and after that airs Sundays at 8 p.m.