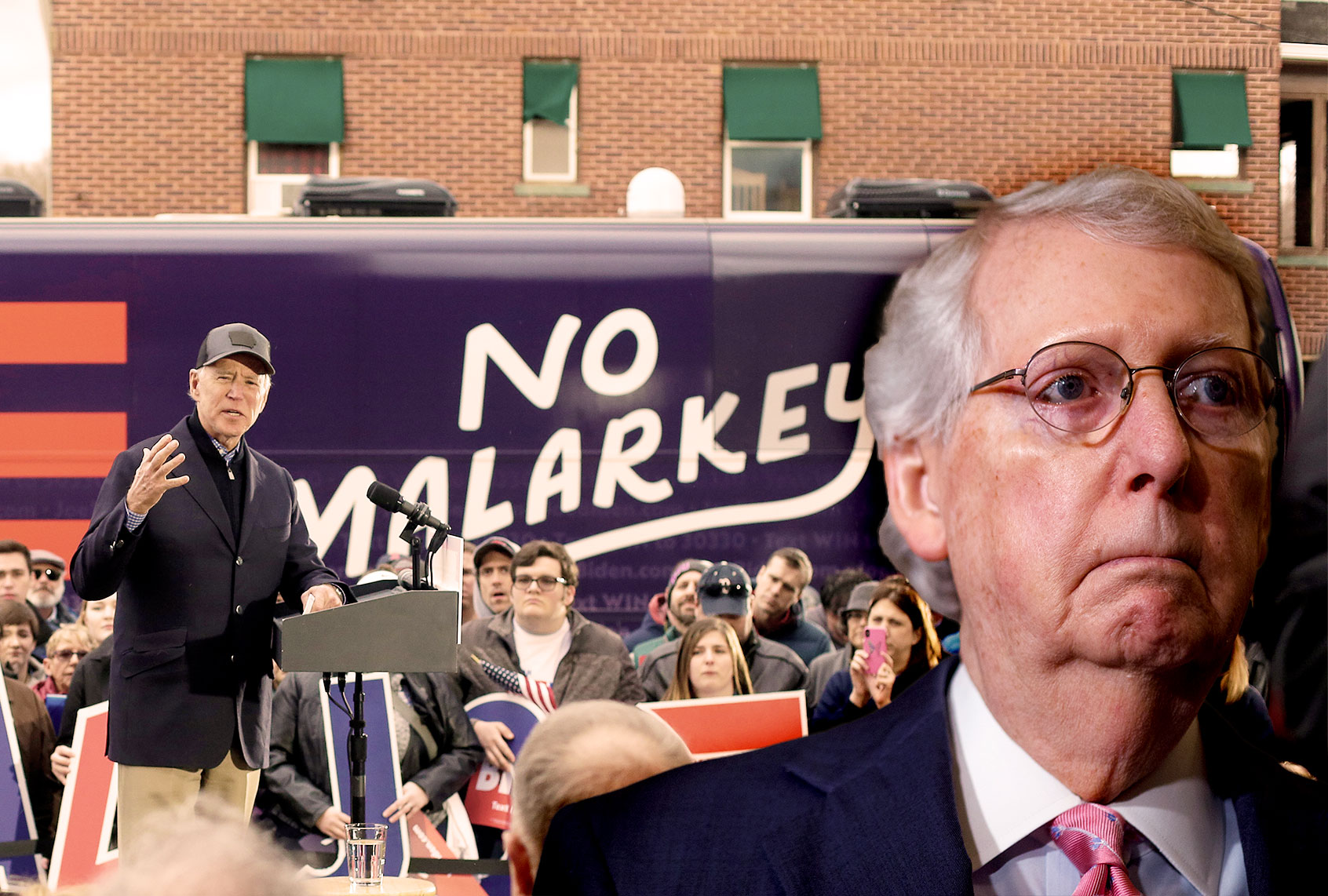 Monday night, after a five-day stand-off, Senate Minority Leader Mitch McConnell, R.-Ky., finally stopped acting like he’s still the boss of the entire Senate. Since Joe Biden was inaugurated, McConnell, taking filibuster abuse to a whole new level, has prevented the Senate from adopting new rules reflecting that Democrats now hold the majority, a move that left Sen. Chuck Schumer, D.-N.Y., the Senate Majority Leader in name only. McConnell was demanding that Democrats agree, in writing, to never kill the legislative filibuster. But on Monday, McConnell suddenly caved and let the Senate begin its business — without a formal promise from Democrats to never kill the filibuster.
This is a victory for Democrats, in that they still retain the right to kill the filibuster if — let’s face it, when — Republicans  use it to prevent any meaningful legislation from reaching the Senate floor. Still, as I write in today’s Standing Room Only newsletter, there’s good reason to worry that this concession from McConnell is a trap. His only goal is to destroy Biden’s presidency and prevent Democrats from passing legislation. There’s no reason to think he’s abandoned that goal.
McConnell’s official explanation is that he believes the filibuster is safe, because “two Senate Democrats confirmed today they will not vote to end the legislative filibuster.” Those Democrats are Sens. Kyrsten Sinema of Arizona, whose spokesperson said she is “not open to changing her mind,” and Joe Manchin of West Virginia, who said “I will not vote” to kill the filibuster.

Want more Amanda Marcotte on politics? Subscribe to her newsletter Standing Room Only.
The defenses of the filibuster have centered around this notion that allowing the minority party absolute power to veto any and all new bills is somehow useful for “unity,” which was a big theme of Biden’s inauguration. McConnell himself defended the filibuster with this unity language, arguing that the “president who promised unity.”
For whatever reason, the mainstream media isn’t doing more to question this strange definition of “unity,” wherein Republicans get everything they want, whether they win or lose elections, and Democrats can piss off forever. This isn’t unity. This is minority rule.
Frankly, Republicans are employing “drunk uncle” logic here, familiar to anyone with a dysfunctional family dynamic. You know the kind, where the drunk uncle at Thanksgiving gets to insult whoever he wants, say rancid and racist things, and make fun of female relatives for being female. If anyone argues back, they are the ones scolded for supposedly disturbing the family’s peace and unity. That is not peace or unity, to just let the bully win, while everyone else has to suffer. That is bullying and nonsensical.
It also fits the definition of a favorite word of Biden’s: Malarkey.
Biden campaigned heavily on the idea of “no malarkey,” even going so far as to put the slogan on the side of his campaign bus. Well, the defenses of the filibuster are pure malarkey. Denying the majority of Americans what they voted for isn’t “unity”. It’s spitting in the face of unity, by putting Democratic voters — again, the majority of voters — outside of the political system. It’s a disunified, two-tier system, where Republican wins count and Democratic wins are meaningless.
The reality is that policy debates are a zero-sum game. In order for Democrats to get what they want — a voting rights bill, a minimum wage increase, a substantive coronavirus relief bill — Republicans will be disappointed. But, if Republicans get what they want — no useful legislation at all — Democrats will be disappointed. There’s no policy to please everyone.
“Unity” simply means the same set of rules for everyone. We aren’t achieving unity if Republicans get to win when they win, but Democrats lose even when they win. The phrase for that is “double standard.” Or, as Biden might say, malarkey.
Biden’s inauguration speech touched on the deeper, truer definition of “unity,” when he said that unity is achieved when “enough of us came together to carry all of us forward.” He even emphasized “enough of us” by saying it twice, making clear that he was talking about majorities of Americans making decisions, and not letting a diminishing minority have veto power over progress.
Democrats can start to fix the malarkey problem and enshrine true unity, where all Americans have a right to vote and have that vote counted, with one simple move: Nuking the filibuster.
Want more Amanda Marcotte on politics? Subscribe to her newsletter Standing Room Only.
There are certainly some agenda items that can be passed with the tool Republicans used to pass their policy priorities against the will of Democrats: Budget reconciliation. But to really enact the Democratic agenda that a strong majority of Americans voted for, especially much-needed ethics and voting reforms, the filibuster has to go. It’s always been an anti-democratic institution. That’s only becoming more apparent, as Republicans clearly intend to use it to kneecap any meaningful Democratic legislation.
Most Democratic leaders appear to get this, as evidenced by Schumer saying that “Our North Star has to be the legislation itself” on MSNBC Monday night. Even Sen. Jon Tester, D-Mont., a moderate who’s shied away from filibuster reforms in the past, told the New York Times on Monday that Republican obstruction via the filibuster may force his hand on the issue. “I feel pretty damn strongly, but I will also tell you this: I am here to get things done,” Tester said. “If all that happens is filibuster after filibuster, roadblock after roadblock, then my opinion may change.”
It’s just a few holdouts, like Sinema and Manchin, who are still so married to the “drunk uncle gets to decide” logic that they don’t see how they’re betraying the majority of Americans with this filibuster defense. Letting McConnell win even when he loses isn’t any rational definition of “unity” — but it is a bunch of malarkey. If Republicans want to control what bills get passed, they should do it the democratic way, by winning elections.