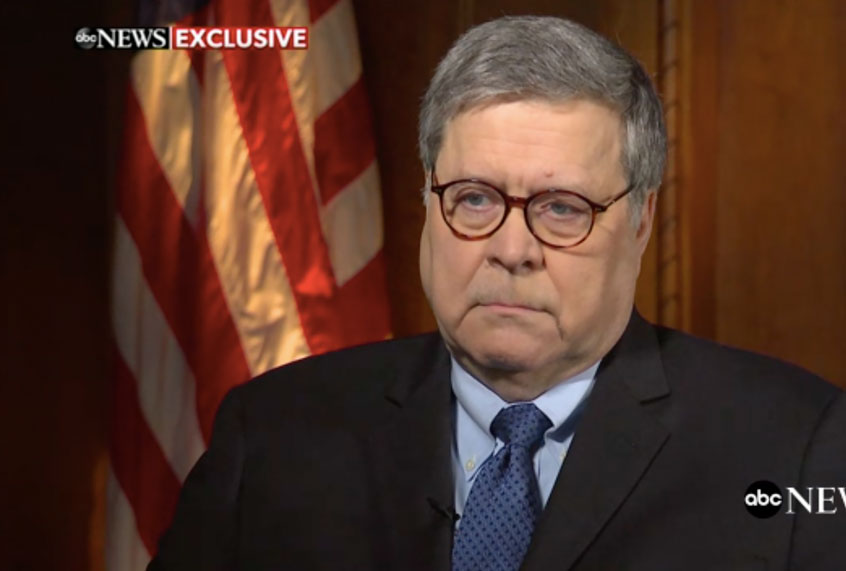 OK, the Law & Order hunt Is now officially on.
Atty. Gen. William P. Barr has directed the formation of an interagency task force dedicated to countering “anti-government extremists” from a variety of viewpoints who agree on nothing else but challenging the public order.
Is it too early for me to suggest that this is either too little too late or overkill forged in the need for a Trump reelection effort? Is it wrong for me to conclude that this is another empty gesture that will not address the Reasons for protest or occasional violence?
It’s late because the FBI and groups like the Southern Poverty Law Center and the Anti-Defamation League already have lists of lots of right-wing, white supremacist groups and thick files on armed militias in their midst. It’s overkill because Donald Trump and Barr have decided that the mythical Antifa, the unorganized, loose coalition of people who express anti-capitalist chants are responsible for street protests turned violent.
A memo obtained by The Washington Post this week outlines an organized effort by the Trump gang to take down those committing violent acts that have marked a relatively few nationwide protests against police brutality and racism. Anti-government extremists have “engaged in indefensible acts of violence designed to undermine public order.”
In other words, apparently it’s not enough to ask the FBI to join local law enforcement in cities across the country.
We need a Task Force.
Next, we need to find an enemy. Maybe Barr should go into the streets that he and Trump want to gas. Wait, aren’t police already there making arrests? Don’t they know whom they are arresting? Why the Task Force, again?
The memo
“Among other lawless conduct, these extremists have violently attacked police officers and other government officials, destroyed public and private property, and threatened innocent people,” Barr wrote to Justice Department law enforcement agencies. “Although these extremists profess a variety of ideologies, they are united in their opposition to the core constitutional values of a democratic society governed by law. . . . Some pretend to profess a message of freedom and progress, but they are in fact forces of anarchy, destruction, and coercion.”
OK, that explains it.
Of course, some of us think that systemic racism, permanent income inequality, the reliance on the racist messages of the Confederacy and the like are unconstitutional as well. In fact, we don’t look kindly on twisting the law to undo criminal confessions of former national security or rewriting sentencing recommendations for a Trump campaign operative or leashing any number of other investigations to trap investigators who looked into Trump’s Russia connections.
Maybe those were too organized for a task force.
Barr did not mention that to date, law enforcement had stopped three people, and they support “Boogaloo, ” a radical right-wing group whose fans anticipate civil war. He added that he and the Justice Department are particularly focused on “those who self identify as Antifa,” a far-left-leaning ideology that encompasses communists, socialists and anarchists. Of course, as anarchists, they don’t want any part of organization. Indeed, of more than 120 people the department has charged federally with protest-related crimes, none has been alleged to have ties to an organized Antifa group, according to public summaries of the cases.
Barr went further, suggesting that “Some of these violent extremists, moreover, may be fortified by foreign entities seeking to sow chaos and disorder in our country.” Barr offered no specifics, though I imagine there’s a lot of talk about smuggling people into this country to join maskless street protests in a time of coronavirus.
Together, Barr suggested there was a “witch’s brew” of extremist groups taking advantage of the protests to incite mayhem, though he and Donald Trump single out Antifa mostly.
In the streets
So, we have a government task force gathering under official shield to find mostly individuals, not groups, intent on sowing chaos. And they are a minuscule fraction of the thousands who have peacefully protested police violence and racism throughout the country.
But the task force, to be led by Craig Carpenito, the U.S. attorney for New Jersey, and Erin Nealy Cox, the U.S. attorney for the Northern District of Texas, will develop information about “extremist individuals, networks, and movements” and share that data with local law enforcement. The group will also provide training and resources to local authorities to help prosecute anti-government extremists.
We can’t have the federal government involved in coronavirus testing or police brutality or opioid treatments because those are the domain of states. But we need a federal task force to find individuals who set fires or vandalize buildings? We can’t have a task force look into systematic police practices or bias against dark-skinned citizens?
At least Barr acknowledged that believing in an ideology is not a crime. Barr told an interviewer that Justice does not charge people with being a member of Antifa (if there is such a thing as membership in an anarchist group) but for crimes like throwing a Molotov cocktail or possessing a gun.
There may be some legal limitations on what this task force can do, Barr admitted.
Meanwhile, Trump just promotes the prosecution of anyone seeking to vandalize monuments.
Let’s file this under using Justice towards obtaining political goals.