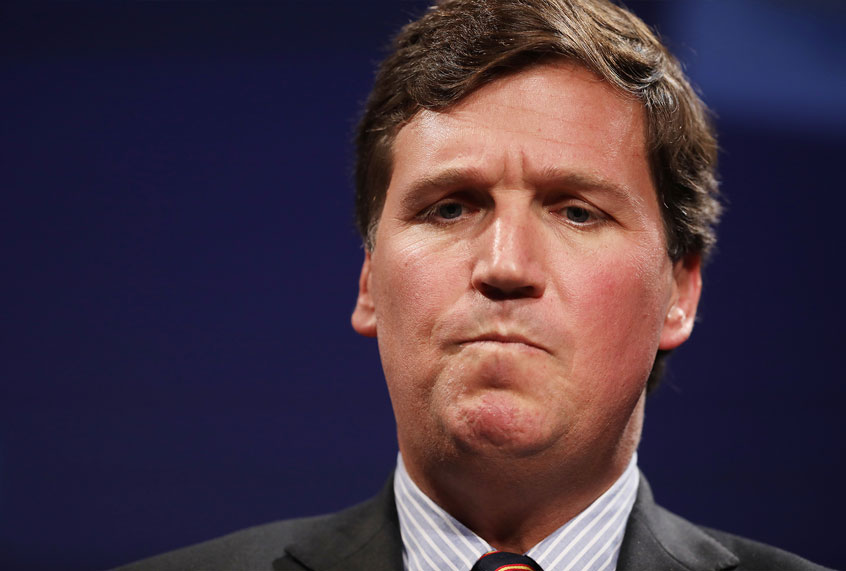 Fox News got to claim victory on Thursday after a new ruling in a lawsuit brought against the company came out in its favor, but the win arrived at a steep cost. To deflect an allegation of defamation, the network was forced to claim that one of its highest-profile personalities can’t reasonably be expected to consistently provide accurate information to viewers.
Here’s the background. Karen McDougal, a former Playboy model, was paid for her silence about an affair she said she had with Donald Trump during the 2016 election by America Media, Inc., the parent company of the National Enquirer, on the Republican campaign’s behalf these details were exposed and confirmed in the case against former Trump lawyer Michael Cohen, who pleaded guilty to participating in the illegal campaign finance scheme. The story became national news, so leading Fox News host Tucker Carlson discussed the case.
But he didn’t present it accurately. Discussing the McDougal case alongside the similar story of Stormy Daniels, Carlson said:

Remember the facts of the story. These are undisputed. Two women approached Donald Trump and threatened to ruin his career and humiliate his family if he doesn’t give them money. Now, that sounds like a classic case of extortion.

McDougal decided to sue Fox News because these facts are not correct. She did not approach Trump, threaten him, or extort him for money. She sold her story to AMI, which promptly buried it. Carlson grossly misrepresented the facts, a point that Fox News did not dispute in the case. McDougal said since Carlson willfully distorted the factual record, he defamed her.
To defend Carlson, however, Fox News had to make a damning claim. The host with the highest-rated show on cable news cannot be trusted, his own network said.
In fact, it’s even worse than that. Federal Judge Mary Kay Vyskocil found:

This “general tenor” of the show should then inform a viewer that he is not “stating actual facts” about the topics he discusses and is instead engaging in “exaggeration” and “non-literal commentary.” . . . Fox persuasively argues . . . that given Mr. Carlson’s reputation, any reasonable viewer “arrive[s] with an appropriate amount of skepticism” about the statements he makes.

So the top-rated program on a news station cannot be reasonably expected to be taken seriously and “reasonable” viewers will be skeptical that his claims are not “actual facts.” Perhaps this is a good legal argument to make, but it’s a dreadful position to be in as a news organization.
The judge argued that Carlson’s defense is bolstered because he started out saying: “We’re going to start by stipulating that everything Michael Cohen has told the feds is absolutely true. Now, assuming honesty isn’t usually a wise idea with Michael Cohen, but for the sake of argument, let’s do it in this case, everything he says is true[.]”
But this actually should cut against Carlson’s defense. His point is that the account he’s giving is based off the claims in the Cohen case. That’s a perfectly reasonable stance to take in an argument. But then he goes on to misrepresent those claims — claims which are a matter of the factual record. So this isn’t a part of his show where he’s clearly being non-literal — it’s a part when he’s explicitly said he’s trying to convey the facts as the Cohen case presents them. And he patently failed to do that. This failure arguably, from McDougal’s point of view, arose out of actual malice. Given that Carlson’s show doubtless has the resources to do basic fact-checking and that his commentary displayed open contempt for McDougal, her legal claim seems eminently plausible.
And in the portion of the monologue that McDougal alleged is defamatory, Carlson explicitly said: “Remember the facts of the story. These are undisputed.” Again, the remarks were clearly couched to make it clear they were not opinion, but facts.
Carlson even repeated his remarks about the extortion later in the show, but the judge found these considerations unpersuasive:

It is true that Mr. Carlson repeatedly asserted that the conduct was extortion during a debate with a guest commentator in which Mr. Carlson also described the payment from Cohen to McDougal as “paying off someone who is extorting you, threatening to make public details of your personal life, if she doesn’t get paid.” See Episode Transcript. But there can be no doubt that Mr. Carlson did so as hyperbole to promote debate on a matter of public concern.

Putting aside the merits of the lawsuit, however, it’s worth dwelling on the fact that Fox News’ official position is that its lead commentator cannot be counted on to be accurate when discussing the news of the day, even when he says he’s simply stating the facts of a case.
The fact is, Carlson is a liar, and from all appearances, he often intentionally lies to his audience to get them to buy into his warped ideological view of the world. For example, he recently misrepresented a government report suggesting it helped cast doubt on climate change, when in fact it reached precisely the opposite conclusion. But of course, people like me are always accusing Carlson of being a liar, and his viewers surely don’t care what I think. How would his viewers feel, though, if they knew Carlson’s own network thought he couldn’t reasonably be trusted?
Perhaps the worst thing for the outlet is that not only did it have to make this damning admission in a legal case, but a judge agreed.

Researchers have uncovered a “tremendous-Earth” appropriate up coming door