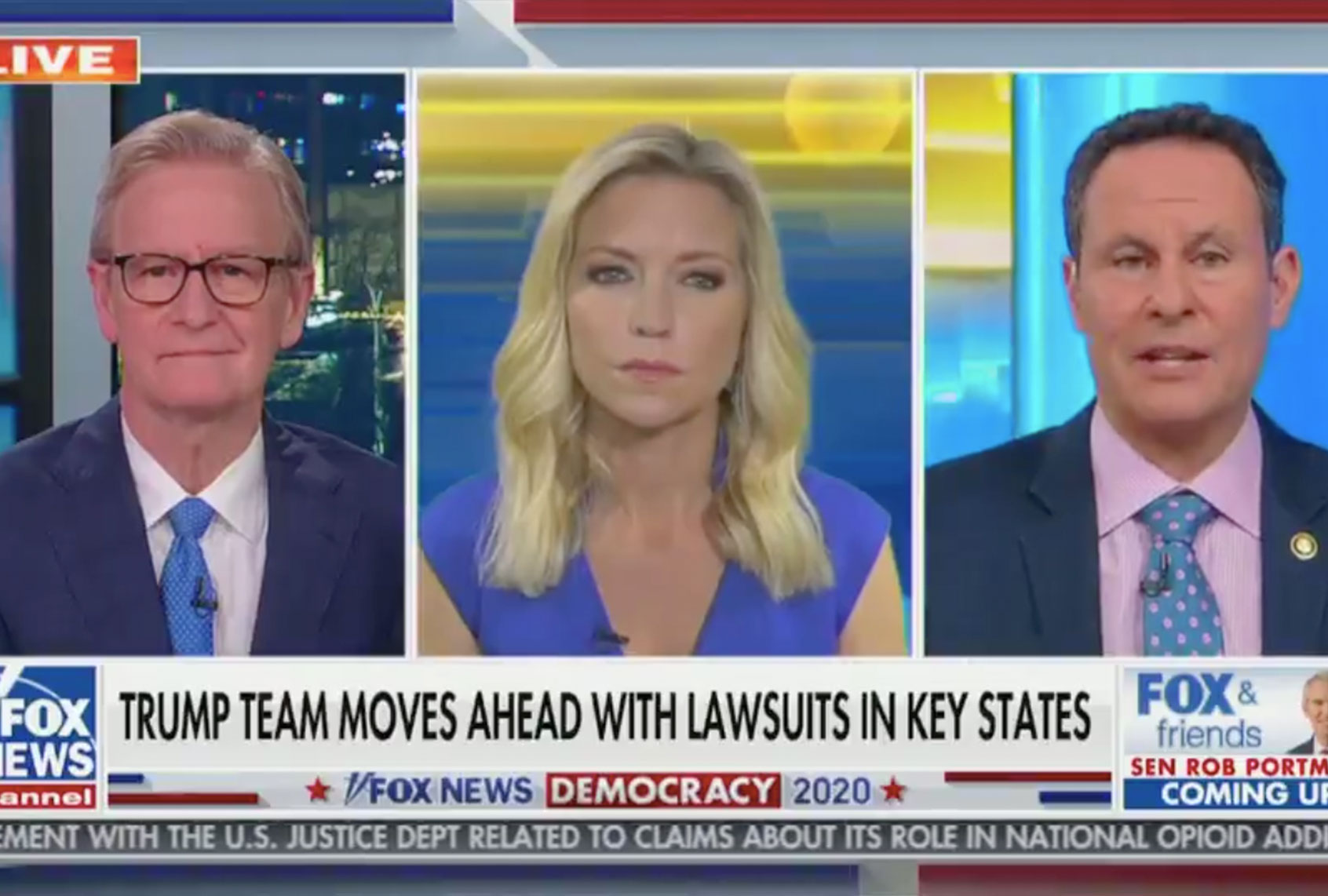 Fox News host Brian Kilmeade has urged President Donald Trump to begin “coordinating” with President-elect Joe Biden’s transition team on key issues, such as national security and the coronavirus pandemic.
Trump has launched a flurry of lawsuits challenging the vote count in numerous states, but those efforts have been highly unsuccessful. The campaign has not produced any evidence of widespread fraud or irregularities.
Though Trump “continues to fight on” despite coming up short in the election, his legal efforts in the key swing state of Pennsylvania are expected to fall flat by the end of the week “if they don’t produce something,” Kilmeade said on Wednesday’s edition of “Fox & Friends.”
With the dubious legal effort seemingly on its last legs, Kilmeade urged Trump to stop his administration from blocking Biden’s transition team from beginning its work.
“I think it’s . . . in the country’s best interest if he starts coordinating on the virus and starts coordinating with security with the Biden team,” Kilmeade said. “And just brief them, because, on the virus, we’re going to be able to get [a vaccine] out as soon as two weeks. We need to coordinate on the transportation and implementation — and you’ll see how thorough the planning has been — so we don’t drop the ball in a little while.”

The presidential transition typically begins immediately after there is an apparent winner. The Associated Press and other major news outlets projected Biden to win the election on Nov. 7. But Emily Murphy, the head of the General Services Administration, has refused to sign paperwork allowing the transition to formally begin.
The agency provides nearly $10 million to fund the transition, supplies the president-elect’s team with government emails and office space at every agency and allows access to senior officials throughout the administration to begin coordinating on issues like the distribution of a future coronavirus vaccine. Agency officials have instructed employees not to communicate with Biden’s team until a Trump appointee “deems the results ‘clear,'” according to documents obtained by BuzzFeed News.
Numerous current and former government officials have warned that transition delays might have an impact on American lives. Andy Card, the former chief of staff to George W. Bush, recalled this week that the delayed transition resulting from the 2000 recount and legal battle “contributed” to a lack of preparedness before the 9/11 attacks.
Though many Republicans have continued to enable Trump’s baseless claims sowing doubt in the legitimacy of the election results, some GOP lawmakers have urged Trump to at least provide national security information to the Biden transition team.
“I don’t think they need to know everything,” Sen. Roy Blunt, R-Mo., told The New York Times. “I think they do need to know some things, and national security would be one of them.”
“President-elect Biden should be receiving intelligence briefings right now — that is really important,” Sen. Susan Collins, R-Maine, agreed. “It’s probably the most important part of the transition.”
Sens. Lindsey Graham, R-S.C., and Chuck Grassley, R-Iowa, also said the Biden team should receive national security briefings.
“Our adversaries aren’t going to wait for [Biden] to catch up to take action,” Sen. Marco Rubio, R-Fla., the acting chair of the Senate Intelligence Committee, said this week. “Giving [Biden] access to additional information doesn’t prejudice the president’s electoral claims.”
But Trump has refused to allow Biden to receive classified intelligence, leading the president-elect to hold a national security briefing from experts outside of the government on Tuesday, many of whom served in the Obama administration.
Biden’s team said in a statement that it would continue to meet with experts outside of the government, “especially as the lack of GSA ascertainment prevents the transition from meeting with and hearing from current executive branch officials, including on pressing matters of national security and foreign policy.”
Biden’s team is also concerned about the lack of information it has received about the administration’s coronavirus vaccine efforts. Pfizer on Wednesday announced that it would seek authorization for its vaccine, which it says is 95% effective, within “days.” Trump has alleged that Biden will try to “steal” credit from him for the development of the vaccine, according to The Daily Beast. At the same time, he has rejected blame for the quarter-million coronavirus deaths under his watch.
Sen. Lisa Murkowski, R-Alaska, told The Times it was imperative for the Trump administration to share vaccine distribution plans with Biden in order to ensure that “as the president-elect is able to come in and bring with him a transition team . . . there is that flow of information that we typically see when we have transitions.”
Dr. Anthony Fauci, the top infectious disease expert in the country and a member of the White House coronavirus task force, warned on Monday that Trump’s sabotage could delay the rollout of the vaccine.
“We want a smooth process for that,” he told NBC News. “And the way you do that is by essentially having the two groups speak to each other and exchange information.”
Biden was starker in his condemnation of Trump’s refusal to accept his defeat.
“If we have to wait until Jan. 20 to start that planning, it puts us behind,” the president-elect said on Monday.
He added, “more people may die if we don’t coordinate.”

Do business leaders have any business being president? Available evidence says no