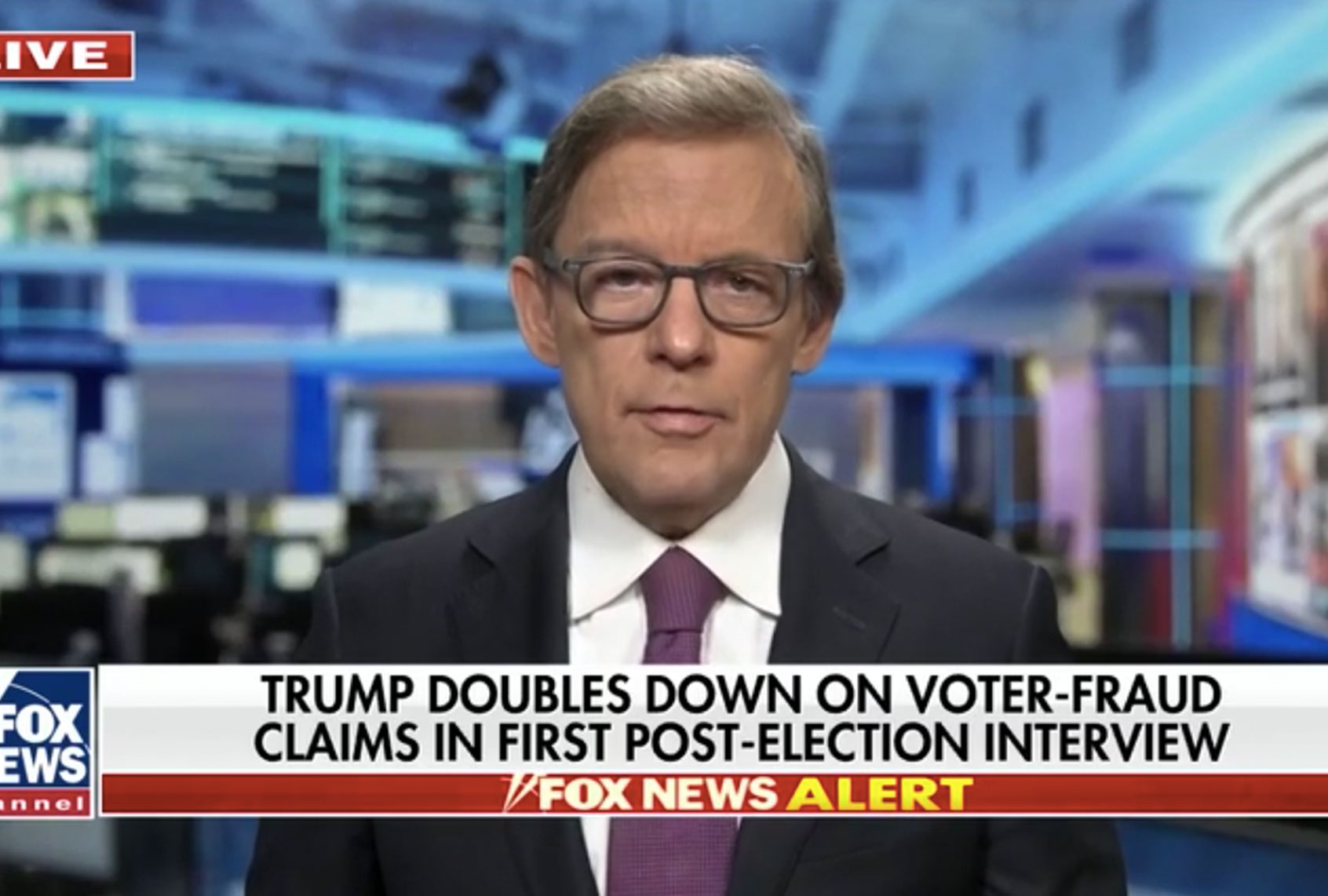 Fox News host Eric Shawn on Sunday debunked President Donald Trump’s false claims about the election after morning show host Maria Bartiromo aired a torrent of unchecked lies from the president.
Shawn, who has repeatedly fact-checked the president’s unfounded claims aimed at undermining an election he lost, picked apart the baseless conspiracy theories mere hours after his own network broadcast them.
“[Trump] doubled down on his claims of widespread voter fraud in the 2020 election, even though local and national election officials, as well as federal and state courts in multiple states — and in some cases the Trump campaign’s own lawyers — have said there is no evidence to prove that,” Shawn said, adding that “experts say such claims are unsupported falsehoods that are not backed up by any facts.”
Shawn later brought on Axios reporter Hans Nichols to dissect Trump’s false claims, noting that one of the president’s arguments was that President-elect Joe Biden could not have gotten more votes than former President Barack Obama despite a huge increase in voting by mail.
“It seems that we have a president who . . . can’t process the fact that someone who he thinks is so inferior to him won the election,” Shawn said.
The comments came shortly after Bartiromo, who landed Trump’s first interview since his election loss and has pushed baseless fraud conspiracy theories herself, allowed Trump to repeat his debunked allegations without noting they are undermined by the facts.
“The facts are on your side,” Bartiromo claimed, even though Trump and his allies have lost nearly every election-related lawsuit to date.
Trump claimed that “glitches” moved “thousands of votes from my account to Biden’s account,” echoing the bizarre and discredited conspiracy theory pushed by attorney Sidney Powell which led to her ouster from his legal team. In spite of no evidence to support his claim, Trump went on to insist that “dead people were applying to get a ballot.”
The president repeatedly complained how some swing states shifted from his column to Biden’s column after mail-in ballots were counted. Some Republican-led legislatures prevented them from being tallied earlier on election night.
“This election was over, and then they did dumps. They call them dumps — big massive dumps in Michigan, Pennsylvania and all over,” Trump said, describing the reporting of vote counts. “If you take a look at . . . every swing state that we’re talking about. And they did these massive dumps of votes, and all of a sudden, I went from winning by a lot to losing by a little. And, in some cases, it took a period of time to do it.”
Trump then launched into a new conspiracy theory, baselessly claiming that his own Department of Justice and FBI “may be involved” in the “fraud.”
“These people have been there a long time. And I know FBI, and the FBI is great at the levels that we talked about. But it’s inconceivable,” he said. “You would think if you’re in the FBI or Department of Justice, this is the biggest thing you could be looking at. Where are they? I’ve not seen anything.”
Trump also lashed out at Georgia Gov. Brian Kemp, a Republican who was endorsed by the president, for doing “absolutely nothing” to overturn the result of the election in his state after election officials repeatedly discredited claims of fraud or irregularities. Republicans have grown increasingly concerned that Trump’s lies will discourage voters from participating in the upcoming Senate runoffs in the state, because they think it could be “rigged.”
Bartiromo did little to press Trump on his unsubstantiated claims. At one point, she appeared to agree with Trump when he falsely claimed the election was “rigged.”
“This is disgusting,” she said. “And we cannot allow America’s election to be corrupted.”

Bartiromo was widely criticized over the interview, which was labeled as propaganda. The network’s news hosts have repeatedly pushed back on Trump’s false claims. Even the Trump sycophants like Laura Ingraham and Tucker Carlson have dismissed the president’s attempt to overturn the election.
“This is propaganda,” tweeted Amanda Carpenter, a former aide to Sen. Ted Cruz, R-Texas, who now serves as a CNN contributor. “Maria went all in on at least three different conspiracies… She’s way off the deep end. This isn’t a Trump problem, it’s a Fox problem.”
“Bartiromo’s interview with the president is filled with so many lies and so much misinformation,” wrote journalist Yashar Ali. “Probably more than any interview during his presidency.”
CNN host Brian Stelter wondered how Bartiromo went from a respected financial journalist to a Trump propagandist. Bartiromo, who was the first reporter to broadcast live from the floor of the New York Stock Exchange in 1995, went on to host CNBC’s “Squawk Box” and several other shows before joining Fox Business and launching her Sunday Fox News show.
“Maria Bartiromo, once a feared and acclaimed journalist, best known for working the floor of the New York Stock Exchange, forcing CEOs to tell the truth, now sits behind a desk and invites the president to lie and lie and lie,” he said on Sunday.
“There would be outrage if Fox News hired someone like InfoWars’ Alex Jones to be anchoring a show on their network,” CNN reporter Oliver Darcy told Stelter. “Frankly, there is not much daylight between Maria and Alex Jones.”
You can watch the Fox News segment below via YouTube:

Trump complains that Fox News is “not watchable,” urges viewers to switch to “fair & balanced” OANN