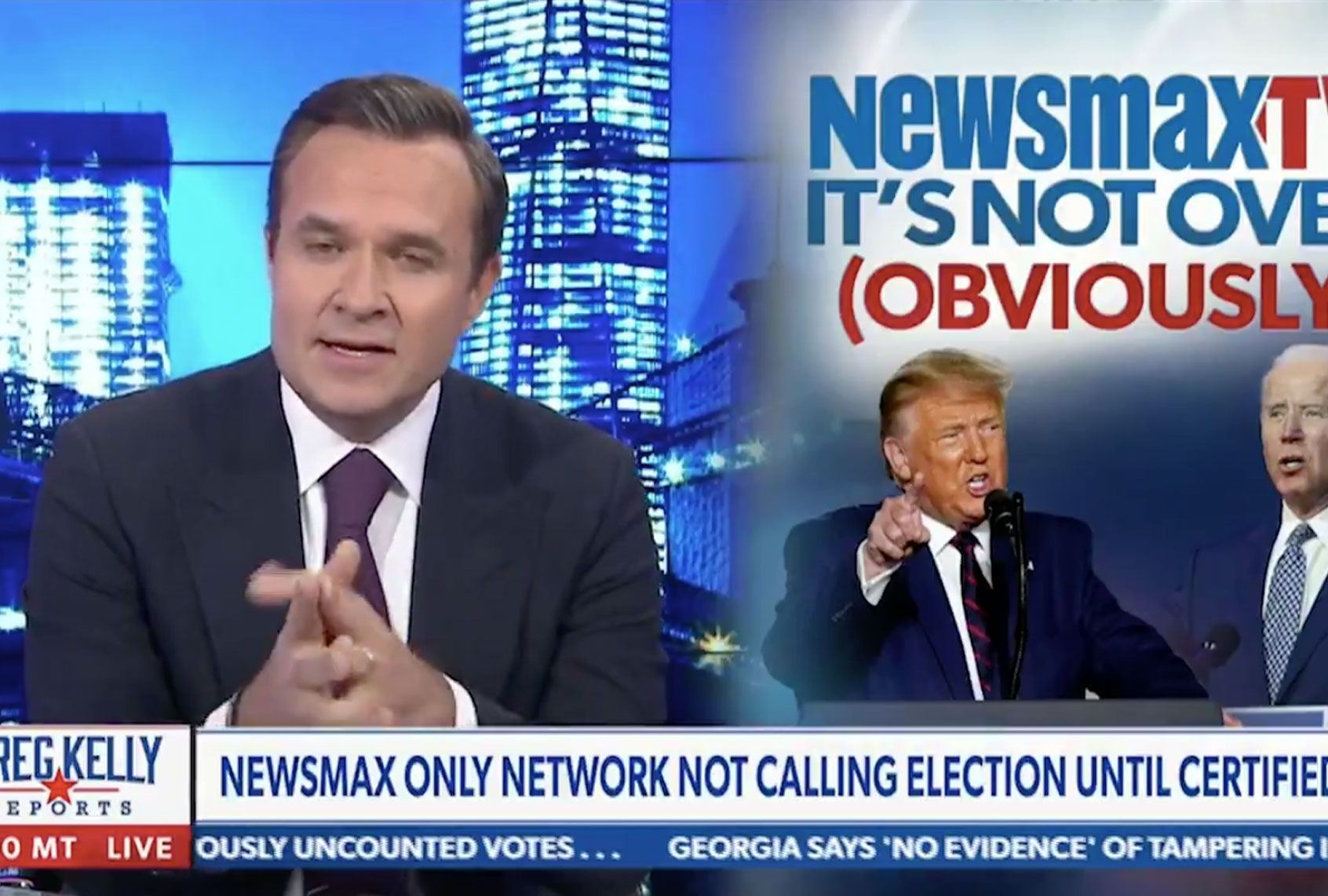 Newsmax TV scored a minor ratings win over Fox News that could signal a major conservative media shift after the network went all-in on President Donald Trump’s baseless election conspiracy theories.
Newsmax’s “Greg Kelly Reports,” a show Trump has plugged on Twitter, edged out “The Story with Martha MacCallum” on Fox among the key 25- to 54-year-old demographic on Monday night, CNN’s Brian Stelter reported, for the first time in the network’s six-year history.
Kelly’s show averaged 229,000 viewers in the demographic while MacCallum, who won her 7 pm timeslot in every category ahead of the election, averaged 203,000. Prior to the election, Kelly’s show only averaged about 10,000 viewers in the 25-54 demographic and about 100,000 viewers in total, according to Stelter. But on Monday, his show hit 949,000 total viewers.
Kelly, a former local New York news anchor, has quickly risen in the post-election conservative TV universe by repeatedly claiming Trump did not lose the election long after every mainstream network called the race.
“This is Newsmax, where we have not called the election,” he bragged last month, more than a week after the election was called. “Why would we? We do not know who has won. This whole idea of a president-elect? It is a media fabrication.”

Kelly has served as an unabashed cheerleader for Trump and claimed that the lame-duck president was “fulfilling his duty” and “defending the Constitution” by refusing to concede and challenging legal votes in numerous states.
Kelly has also repeatedly hosted former Trump attorney Sidney Powell, allowing her to push bizarre and unfounded conspiracy theories that even Fox News’ Tucker Carlson ripped as baseless. He even occasionally calls out his competitors directly.
“Fox does seem to be going through something of an identity crisis,” he told viewers last month. “They’re not very supportive of the president these days — they seem to be bending over backward to hurt him.”
Other Newsmax shows have also seen a rating bump. Stelter noted that the rating bump is particularly pronounced when Fox is airing straight news shows, like MacCallum’s or fellow host Neil Cavuto’s, rather than pro-Trump opinion shows like “The Five” and “Hannity.”
Newsmax chief Chris Ruddy, a longtime friend of Trump, told CNN that the network plans to continue to expand its opinion shows to capitalize on its rating boom, though the network significantly trails Fox News in the overall ratings. Still, Newsmax averaged just 72,000 viewers before the election, which jumped to 204,000 after the election.
“We’re here to stay,” Ruddy said. “The ratings are showing that.”
The network has seen a boost from Trump’s tweets. The president has repeatedly urged followers to tune into the channel while slamming Fox News for not backing his baseless conspiracy theories.
Fox executives have taken notice. CNN reported last month that Fox News producers were told not to continue booking regular guests if they kept appearing on Newsmax, though the network denied the report.
Some Fox employees described Newsmax to CNN as “far-right” and “fringe” and specifically criticized Kelly’s program.
Trump has also touted One America News Network, an even more fringe outlet that is not even rated by Nielsen because of its small audience, has also seen a boost after the election, according to its executives (who are not always the most reliable sources).
OAN President Charles Herring said last month that a “massive wave of former Fox News viewers have abandoned Fox and have found a home at OAN.”
Steve Tomsic, the chief financial officer at Fox, cited Newsmax and OANN at a financial conference this week.
“I think when people think about competition, they sort of, their knee-jerk reaction is to think, ‘well all we need is two or three talking heads to go head to head with ours.’ The business is much bigger than that,” he said, according to CNN. “So we feel super confident about Fox News being able to compete in any environment going forward.”
Fox coverage has grown more disparate since the election. Some hosts, like Marta Bartiromo, have fully embraced Trump’s baseless conspiracy theories while longtime Trump boosters like Laura Ingraham and Tucker Carlson have reluctantly admitted the president’s defeat. The network’s “news side” has been far more active in batting down election falsehoods.
“It seems that we have a president who, he can’t wrap his brain or mind around the fact, he can’t process that someone who he thinks is so inferior to him won the election,” host Eric Shawn declared last week.
Fellow host Sandra Smith expressed disbelief when a guest tried to suggest that President-elect Joe Biden did not win.”What? What is happening?” she questioned on a hot-mic while off-camera during the viral moment.
“We’ve called it.”