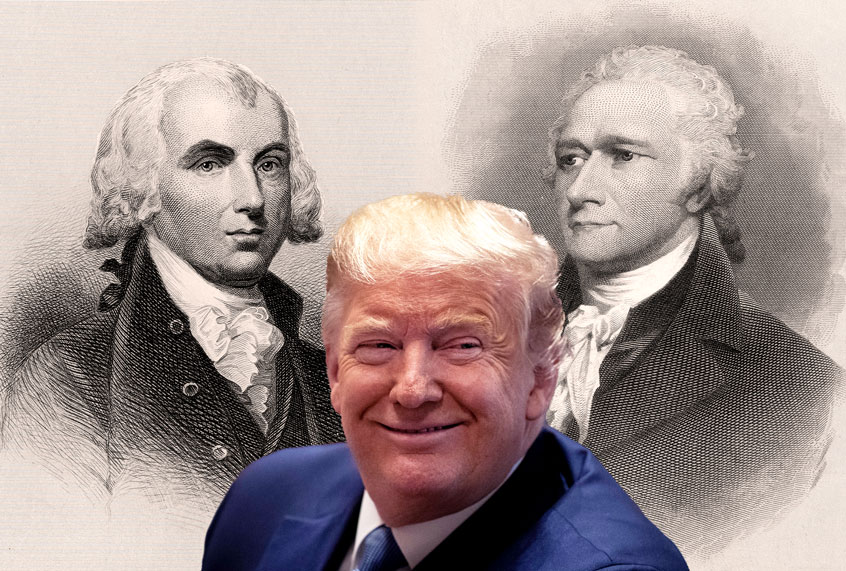 Who is likely to make suitable provisions for the public defense, as that body to which the guardianship of the public safety is confided; which, as the centre of information, will best understand the extent and the urgency of the dangers that threaten; as the representative of the whole, will feel itself most deeply interested in the preservation of every part; which, from the responsibility implied in the duty assigned to it, will be most sensibly impressed with the necessity of proper exertions; and which, by the extension of its authority throughout the States, can alone establish uniformity and concert in the plans and measures by which the common safety is to be secured?

A number of governors of both parties took quick action in asking their citizens to stay home and, later, to wear masks. Ohio, even with Republican Gov. Mike DeWine, has joined the Midwestern alliance of states. But a number of governors took their cues from the White House and initially treated the pandemic as a hoax. Then, as the dire situation became more than abundantly clear, these governors attempted to claim they had been on it all along or had “just learned” that people without symptoms could spread the virus. Lately, many have determined to reopen their economies against the advice of health experts.
Of the states, as John Jay wrote, in his “Concerning Dangers from Foreign Force and Influence” (Federalist No. 3, Nov. 3, 1787):

The pride of states, as well as of men, naturally disposes them to justify all their actions, and opposes their acknowledging, correcting, or repairing their errors and offenses. The national government, in such cases, will not be affected by this pride, but will proceed with moderation and candor to consider and decide on the means most proper to extricate them from the difficulties which threaten them.

Well. It just goes to show that even a founding father simply cannot anticipate everything. We must, however, give it to Jay that he would have been correct in his logical estimation of the natural moderation of a national government — at least until the absurdly far-off year of 2017.
When Trump tweeted his support of protests that verged on violent insurrection to “LIBERATE!” the states of Virginia, Michigan and Minnesota (apparently, so people can congregate and not wear masks and not follow his own health experts’ recommendations — oh, and brandish guns in public, as some are suspiciously eager to do), we can see that his strategy is to continue to feed his base of voters the steady diet of trolling the liberals (and the scientists, other experts and generally reasonable people) he and they so relish.
To these provocations, the writers of the Publius articles would warn us not to allow one unhinged anti-federalist president to divide us forever.
In a passage from his “Objections to the Proposed Constitution From Extent of Territory Answered” (Federalist No. 14, Nov. 30, 1787), Madison seems to be directly speaking to us today, warning against heeding those who would attempt to gain politically by dividing us:

No, my countrymen, shut your ears against this unhallowed language. Shut your hearts against the poison which it conveys; the kindred blood which flows in the veins of American citizens, the mingled blood which they have shed in defense of their sacred rights, consecrate their Union, and excite horror at the idea of becoming aliens, rivals, enemies. And if novelties are to be shunned, believe me, the most alarming of all novelties, the most wild of all projects, the most rash of all attempts, is that of rendering us in pieces, in order to preserve our liberties and promote our happiness.