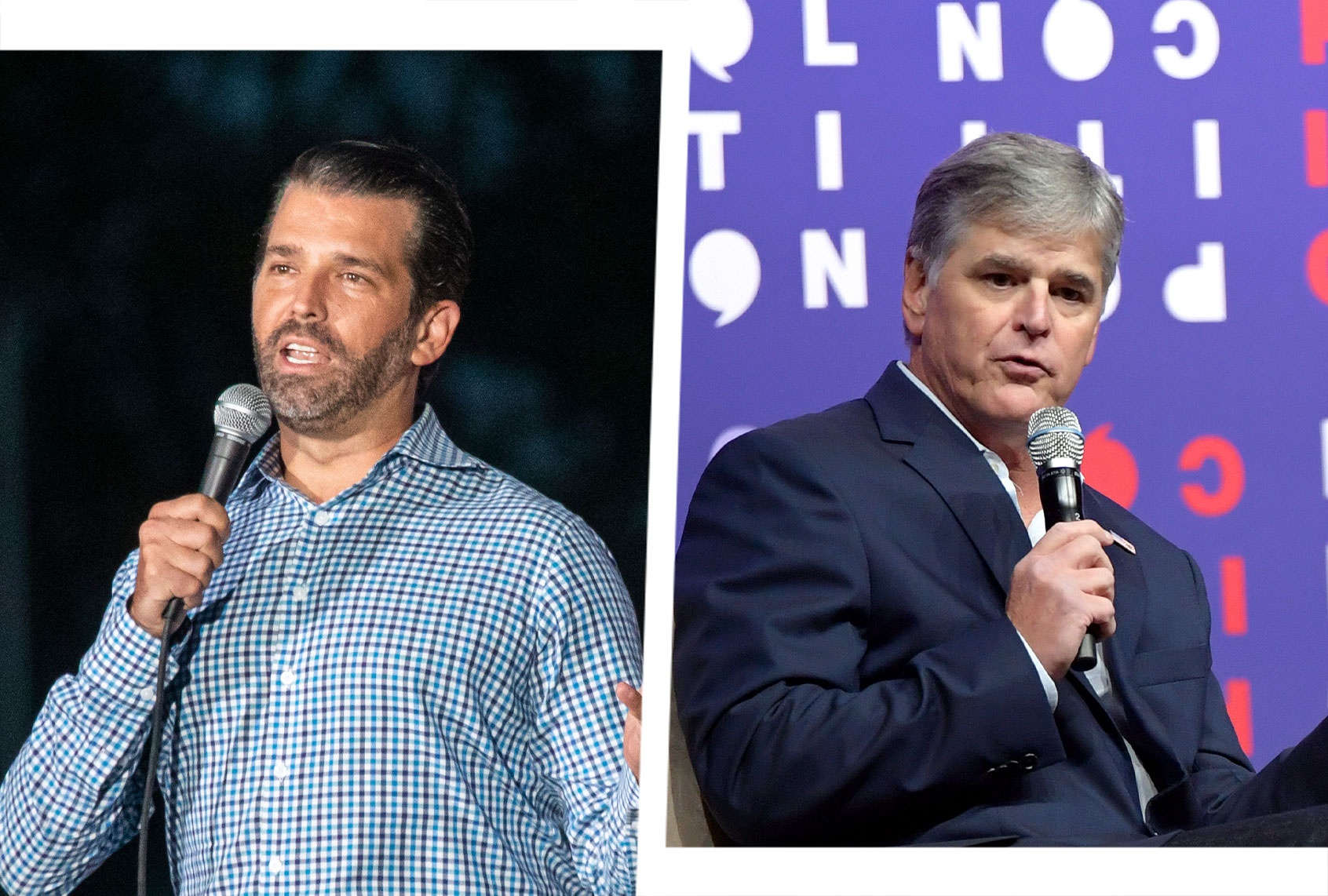 The Republican National Committee spent hundreds of thousands of dollars last month on books by Donald Trump Jr. and Fox News personality Sean Hannity, federal records show.
The RNC’s August expenditure report filed with the Federal Election Commission shows that the committee spent $405,404 on “donor mementos” from book retailers Barnes & Noble, booksamillion.com and Porchlight Books.
The RNC promoted Hannity’s book, titled “Live Free or Die,” in early August, offering signed “priority access” copies as an incentive for political donations of $75 or higher. Around the same time, the committee launched a similar promotion for Trump Jr.’s new book, “Liberal Privilege,” which it awarded to donors at the same price point.
Emails sent from an RNC address in late July suggested that the committee would make bulk pre-orders of the books, and it appears to have reported the first three on Aug. 5 — to Barnes & Noble, Booksamillion.com and Porchlight Books. A Porchlight representative confirmed that the campaign’s order in that amount came in before that, and was for copies of Hannity’s book. Spokespeople for Barnes & Noble and Books-a-Million did not reply to requests for comment.
The Porchlight representative said that an RNC bulk order of “Live Free or Die” later that month matched the RNC’s Aug. 19 report of $119,250, but said that the RNC had not made any bulk orders for “Liberal Privilege.”
Last November, the RNC shelled out nearly $100,000 for Trump Jr.’s first book, “Triggered,” boosting it to the top of bestseller lists.
Two days after the first “Triggered” fundraising email was sent last fall, an RNC spokesperson told the New York Times that “we haven’t made a large bulk purchase, but are ordering copies to keep up with demand. Each book is sold to an individual who supports the Republican Party.”
Despite the spokesperson’s use of sales terminology, FEC records show that the RNC classified the purchases as “donor mementos.” The recent purchases share that classification.
There are slight differences this time around. Trump Jr.’s first book was awarded to supporters who contributed at least $50. This time, the RNC hiked the price to a $75 donation, as with Hannity’s book.
Another difference: Trump Jr. published his first book with Center Street, an imprint of Hachette Books. His new book is self-published.
“While I was offered a generous book deal by my previous publishers, I turned it down and decided to self-publish,” Trump Jr. said last month, in a statement sent by the RNC to The Hill. “The RNC was able to raise almost a million dollars from their fundraising campaign with my first book, ‘Triggered.’ I look forward to helping them fundraise once again for the benefit of the Republican Party.”
By self-publishing, Trump Jr. eschews the distribution, marketing and publicity support afforded by a top publisher, but he could claim up to 70% in royalties, top campaign finance authority Brett Kappel told Salon.
“And he’s got the RNC taking care of some of that promotion up front,” Kappel said.
The RNC, of course, is also taking care of some of those purchases. But without comment from the other vendors or the RNC — which did not reply to Salon’s questions for this article — it’s not clear how exactly the committee split its $405,000 in bulk orders between Hannity and Trump Jr.
(“This is a political pamphlet, not a book,” Peter Osnos, founder of the nonfiction imprint PublicAffairs, told the New York Times about Trump Jr.’s new book. “It hasn’t been subjected to any measure of quality or accuracy.”).
It’s possible that the entire $405,000 itemized to book retailers were for Hannity’s book — which is now a No. 1 bestseller. As the New York Times reported last month, Trump Jr.’s distribution plan appeared to avoid traditional retailers almost entirely:

Unlike Mr. Hannity’s book, “Liberal Privilege” will not be in bookstores. A person with knowledge of the project said that it will be $29.99 on Mr. Trump’s website, where presales are being handled, and on Amazon, along with an e-book and an audiobook narrated by Kimberly Guilfoyle, a senior campaign adviser and Mr. Trump’s girlfriend. It’s unclear if any major retailers will carry the book, though managers at some traditional distribution channels said last week that they hadn’t heard anything about it. ReaderLink, a company that supplies books to more than 80,000 stores, including big-box chains like Walmart and Target, said it had no plans to distribute it.

In other words, it appears possible or likely that the RNC purchased books directly from Trump Jr., or intends to do so. “Liberal Privilege” did not go on sale until Aug. 30, and if the committee waited until September to buy the book in bulk, those purchases would not show up until it files its September report sometime next month, shortly before the election.
It’s also possible the RNC fulfilled part of its preorder promise through Amazon, which is selling Trump Jr.’s book. The committee’s August filings reveal an unusually large $126,423 expenditure to Amazon on Aug. 10, for “office supplies.”