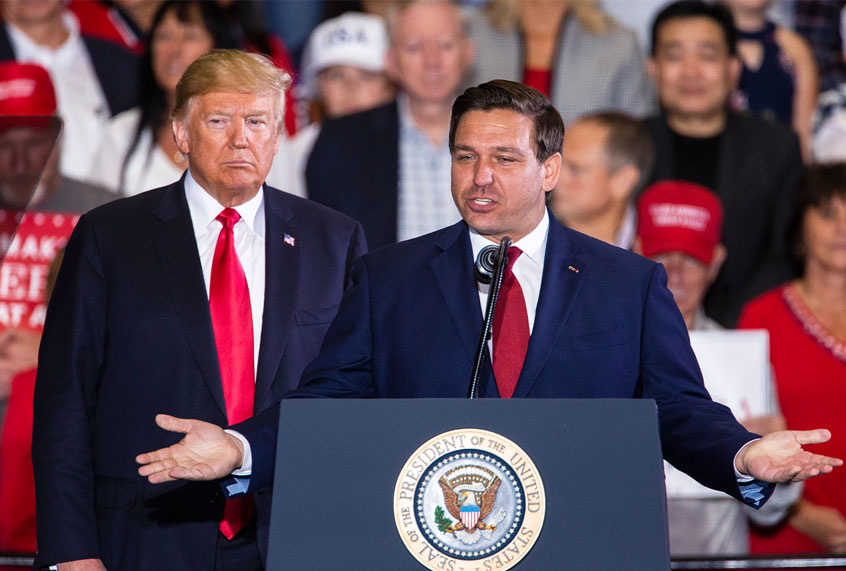 It was a little startling to hear President Trump announce that he would throw out the first ball at a New York Yankees game next month — now that the delayed and shortened Major League Baseball season is underway — since has refused to do this since he became president. But since Dr. Anthony Fauci was getting so much good press in anticipation of his season-opening foray to the mound in Washington, Trump was clearly jealous, and no doubt pleased to learn there would be no crowd in Yankee Stadium to boo him. But then Fauci got ribbed mercilessly in the press for his wild pitch, and Trump was perhaps reminded that he might not be able to do much better. So over the weekend he announced to the nation that he was just too busy.

Our very busy president played golf on Saturday, and spent most of Sunday retweeting images of his paramilitary raid on Portland, rando sh**posters and conspiracy theories. He even retweeted a whiny lament about the greatness of hydroxychloroquine, a golden oldie at this point. So I’m sure the country feels much relieved by Trump’s “new tone” that the media keeps going on about, and no doubt the catastrophic collapse of his already tepid poll numbers will reverse itself immediately.
Meanwhile COVID-19 continues to ravage the nation and no matter how hard new campaign manager Bill Stepien and the rest of his team try to get him to take it seriously, Trump is simply unable to do it. He reluctantly had to cancel his convention extravaganza in Jacksonville — which had been moved from Charlotte at his insistence — mainly because even Republican diehards didn’t want to travel into the epicenter of America’s massive surge in cases.
Trump’s fatuous spin that this was another of his “strong” decisions to keep the country safe at all costs fell flat since there are endless clips of him expressing disdain for anyone who thought that staging a crowded political convention in the middle of a raging pandemic might not be a great idea. He has never demonstrated interest in keeping the country safe from this pandemic. He just wants to keep “his numbers” down, and that’s not the same thing.
This news had to hit Ron DeSantis, Florida’s Republican governor, especially hard. He had lobbied hard for the convention when Trump had his temper tantrum last month over North Carolina’s refusal to guarantee that his fans would be able to attend speeches in the indoor event center without wearing masks or practicing social distancing. DeSantis was more than happy to guarantee the Trumpers a good time without all those unpleasant COVID guidelines. But even then the clock was ticking on Florida’s exploding caseload
If you want to see the perfect realization of the Trump administration’s pandemic policy, look to Florida. It is certainly true that the virus has surged in a number of other states, including Texas, Arizona and California. The first two, like Florida, were driven to open too rapidly by Republican governors, while California’s surge seems to be linked to general overconfidence — people failed to observe safe guidelines once the lockdown orders were lifted. Florida isn’t alone in this surge and it won’t be the last state to experience one.
But only in Florida did the governor appear on TV and have a full-blown Trumpian whine-fest in May because he wasn’t getting enough credit for keeping cases lower in Florida than New York:

DeSantis spoke too soon and opened his state much too fast. Florida is now the one of the global epicenters of this virus and it’s not getting better anytime soon. Every day since July 10 the state has averaged more than 10,000 new cases per day. According to the New York Times, the state has had 423,800 cases and 5,854 deaths from the virus so far.
DeSantis bears the brunt of the blame for all of this. His main concern from the beginning was to reopen for business at all costs — in the apparent conviction that people would forget about the virus as soon as they could go back to the malls — and the results are there for all to see. Throughout the crisis he has been belligerent, stubborn, unsympathetic, cavalier and self-centered. He issues orders but refuses to offer state support to make them work. He is, in short, exactly like Trump.
The Washington Post published an in-depth look at the DeSantis administration’s response to the pandemic, and it’s devastating. Just as Trump refuses to listen to experts, Desantis shoved aside his scientists and stopped public health briefings altogether. He refutes the models if they don’t suit his purpose and spins the data to sound better than it is. Some of the state’s top experts have left in the middle of the crisis.

As the virus spread out of control in Florida, decision-making became increasingly shaped by politics and divorced from scientific evidence, according to interviews with 64 current and former state and administration officials, health administrators, epidemiologists, political operatives and hospital executives. The crisis in Florida, these observers say, has revealed the shortcomings of a response built on shifting metrics, influenced by a small group of advisers and tethered at every stage to the Trump administration, which has no unified plan for addressing the national health emergency but has pushed for states to reopen.

When DeSantis insisted on reopening Florida’s economy early, Trump cheered him on. In fact, the Post reports that Trump gleefully told advisers that Florida’s supposed success gave other states the validation to open prematurely as well. DeSantis returned the favor by backing Trump’s play all the way, refusing to enact measures like mask-wearing that might have helped mitigate the surge. The Post reports that Trump administration officials “regularly sent reports and clips of DeSantis bragging about Florida not having cases early in the outbreak, to argue that many states were overreacting and, at times, that seasonal heat could cure the virus.”
Like his hero and mentor, DeSantis can’t find time to talk to his experts but does have time to talk to Fox News and Rush Limbaugh, which he has done numerous times as the virus has exploded in his state.
DeSantis was a backbench congressman who won the 2018 gubernatorial election largely because of Trump’s endorsement and he’s been a loyal henchman from the beginning. It was assumed all along that he could help deliver Florida to Trump this November and that his future might well include an address on Pennsylvania Avenue. (Yes, he is that ambitious.)
But lashing himself to the Trump Train was a risky move from the outset, and it doesn’t look like it’s paying off. The latest Quinnipiac poll has Biden leading Trump by 13 points in the Sunshine State, 51% to 38%. DeSantis isn’t doing any better. In April, 50% of Florida voters approved of his handling of the pandemic. That’s now down to 38%, the same number who back Trump’s re-election.
Florida elected a mini-Trump in 2018 and got a Trump mega-disaster in 2020. Now the whole country is paying the price.