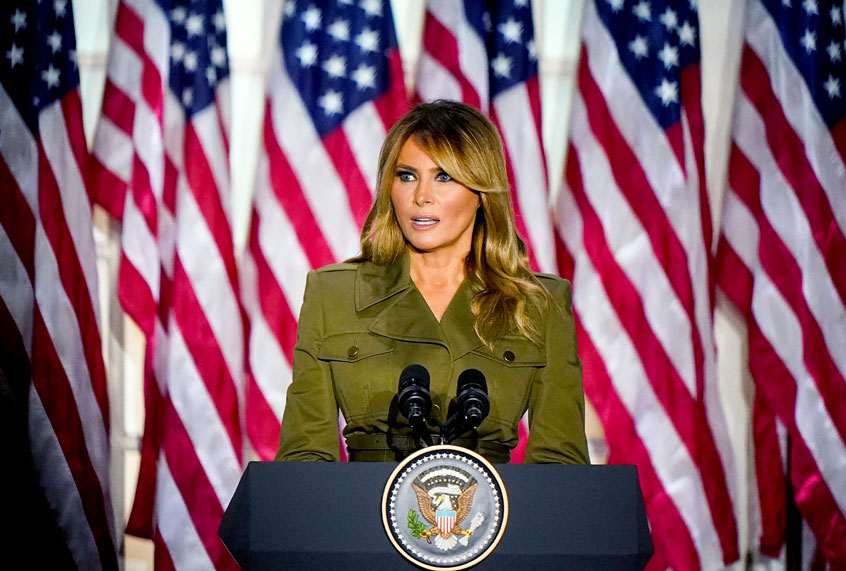 First lady Melania Trump’s speech at the Republican National Convention was overshadowed by an invitee list ripe with far-right fringe views and multiple likely violations of federal ethics laws.
The first lady headlined the second night after ratings from the first night fell significantly short of last week’s Democratic National Convention, which featured former first lady Michelle Obama. Trump spoke to a maskless crowd, which was not tested for COVID-19 at the White House Rose Garden. The setting raised questions about whether it violated the Hatch Act, which bars federal employees from engaging in political activity. The first lady is not a government employee and the president is exempt, but other administration officials likely violated the ethics law throughout the night.
The maskless crowd undercut Trump’s empathetic message to those suffering from the coronavirus, during which she praised her husband’s widely-criticized and haphazard response.

The first lady also discussed her child-focused “Be Best” campaign and reflected on the “racial unrest in our country” as she urged Americans to “come together in a civil manner.” Her husband spent weeks calling peaceful protesters “terrorists” and “thugs,” and federal forces tear-gassed and beat demonstrators.
“I don’t want to use this precious time attacking the other side,” she said. “That kind of talk only serves to divide the country further.”

The first lady also claimed that her husband represented “total honesty,” even though Washington Post fact-checkers have counted more than 20,000 false and misleading claims by the president since he assumed office. Trump appeared to stretch the definition of “honesty” to apply to her husband.
“We all know Donald Trump makes no secrets about how he feels about things,” she said. “Total honesty is what we, as citizens, deserve from our president. Whether you like it or not, you always know what he’s thinking.”

While the first lady drew praise for offering a “moment of calm” amid the convention’s unhinged conspiracy mongering after she was caught plagiarizing Michelle Obama’s speech during the last GOP convention, much of the attention was focused on other women invited to the event.
One scheduled speaker, “Angel Mom” Mary Ann Mendoza, tweeted a lengthy thread hours before the event from a QAnon conspiracy theorist expressing deeply anti-Semitic claims and promoting “The Protocols of the Elders of Zion,” an anti-Semitic hoax which was popular in Nazi Germany, The Daily Beast reported.
Mendoza was dropped from the line-up after the report, even as Georgia congressional candidate Marjorie Taylor Greene, a QAnon conspiracy theorist, announced that the president had invited her to attend his acceptance speech. Greene has also made anti-Semitic and Islamophobic social media posts, Politico reported earlier this summer.
The second night of the convention featured a speech by Abby Johnson, the former director of a Planned Parenthood clinic who became a staunch anti-choice advocate. Johnson repeated a conversion story she has told numerous times before, though her story about quitting in protest has been widely disputed. She made other false claims during her speech, echoing the dubious conservative refrain that Planned Parenthood “strategically” places clinics in minority areas.

Shortly before her speech, Johnson took to Twitter to advocate for “household voting,” in which each household gets one vote. Her comment doubled down on a tweet from May.
“In a Godly household, the husband would get the final say,” she wrote at the time.

Johnson also drew criticism ahead of her speech over a YouTube video she posted earlier this year in which she argued that it would be “smart” for police to racially profile her adopted biracial son, because “statistically, my brown son is more likely to commit a violent offense over my white sons.”
“Right now, Jude is an adorable, perpetually tan-looking little brown boy,” she said in the video. “But one day, he’s going to grow up, and he’s going to be a tall, probably sort of large, intimidating-looking-maybe brown man. And my other boys are probably going to look like nerdy white guys.”

The second night of the convention also featured the president and acting Homeland Security Secretary Chad Wolf, who was recently found to have been appointed to his position illegally, presiding over a naturalization ceremony at the White House, itself likely illegal. Trump praised the immigrants for following the rule of law, even though he has cut legal immigration by half, and his administration has denied would-be citizens naturalization ceremonies amid the pandemic.

A White House official claimed that the ceremony did not violate the ethics law, because the White House “publicized the content of the event on a public website this afternoon and the campaign decided to use the publically [sic] available content for campaign purposes.”
However, legal minds pushed back on the claim.
“As a lawyer who used to enforce the Hatch Act at the White House, this is absolutely not how it works,” Daniel Jacobson, a former Obama White House lawyer, tweeted. “If they filmed it knowing and intending that it would be used at the convention (which they obviously did), it violates the law.”
Democrats also accused Secretary of State Mike Pompeo of violating the Hatch Act after he bucked diplomatic tradition to speak at the convention from Jerusalem. Pompeo is the first secretary of state in 75 years to speak at a political convention.

Rep. Joaquin Castro, the chairman of the House Foreign Affairs Oversight and Investigations Subcommittee, launched an investigation into Pompeo’s appearance, writing that it was “highly unusual, and likely unprecedented, for a sitting secretary of state to speak at a partisan convention for either of the political parties. It appears that it may also be illegal.”
Former Florida Attorney General Pam Bondi also spoke at the convention, proudly declaring that she “fought corruption,” even though she has been accused of corruption herself after dropping an investigation into Trump University following a $25,000 donation from the Trump Foundation before it was shut down following a New York attorney general probe.
Bondi, without a hint of irony, accused Democratic nominee Joe Biden of nepotism, arguing that during his career “the people who benefited are his family members — not the American people.”

Bondi’s speech came moments before Tiffany Trump, one of the president’s children, spoke at the convention, a day after Donald Trump Jr. spoke on the first night. Eric Trump spoke later in the evening.

Eric Trump claimed that his dad had achieved “peace in the Middle East,” even though his attempt to task Jared Kushner with an insurmountable peace deal was quickly and roundly rejected by Palestine. Eric Trump also praised his father for ending “never-ending wars,” even though the number of troops sent overseas has only grown since he took office.

Larry Kudlow, Trump’s top economic adviser, soon followed with a speech discussing the coronavirus pandemic in the tense.
“It was awful,” he said. “Health and economic impacts were tragic. Hardship and heartbreak were everywhere, but presidential leadership came swiftly and effectively with an extraordinary rescue for health and safety to successfully fight the COVID virus.”
There were more than 36,000 new confirmed cases and more than 1,100 new deaths in the U.S. on Tuesday.

Fact-checkers shook their heads at the rampant dishonesty on display throughout the convention.
“It was another tsunami of untruths on the second night of the Republican National Convention,” The Washington Post’s fact-checkers wrote. After calling the first night a “parade of dishonesty,” CNN fact-checker Daniel Dale said he was overwhelmed Tuesday by a “whole bunch of false claims.”

“It’s really bad on a night with this many people watching to still be broadcasting false information to a country where we’ve lost 176,000 Americans,” MSNBC host Rachel Maddow said Tuesday. “The last thing we need is more lies and misinformation about what this virus is.”