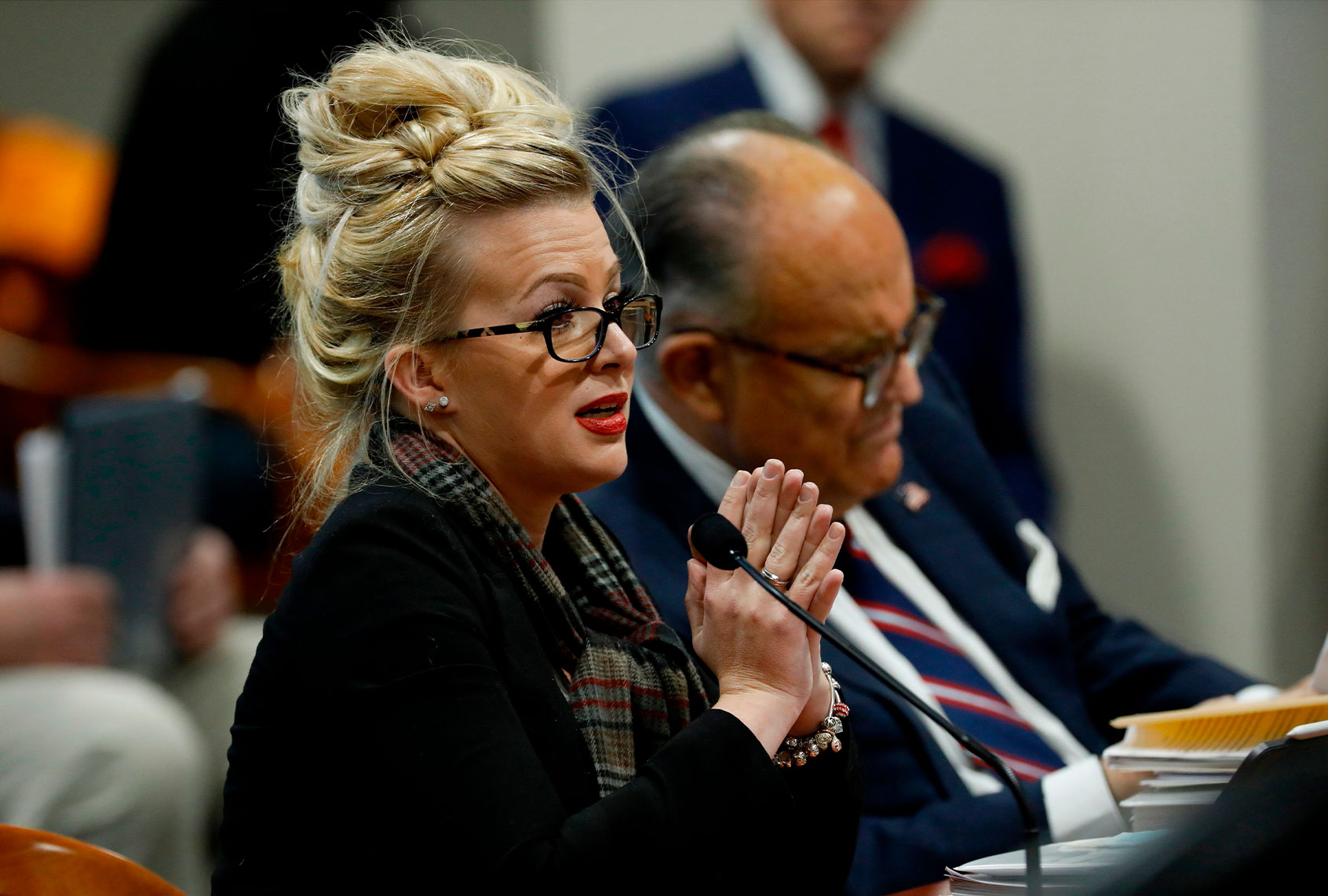 Rudy Giuliani, erstwhile spokesperson for LifeLock identity theft protection services and current top lawyer for President Donald Trump’s slapdash crusade to litigate an electoral win and undermine public trust in the country’s elections, led a motley group of witnesses alleging baseless claims of voter fraud and other malfeasances in a five-hour hearing on Wednesday evening in front of Michigan State lawmakers.
There is no evidence of voter fraud in the presidential election, according to election officials in every state. President-elect Joe Biden won the electoral contest with a record-setting 81 million popular votes — a margin of victory of nearly 7 million votes over Trump, according to the most recent numbers from the Associated Press.
A number of the campaign’s plaintiffs, including several in Michigan lawsuits, present complicated biographies, many of them publicly embracing fringe conspiracy theories. Giuliani’s witnesses on Wednesday appeared to follow an unreliable track, alleging that dead people had voted and tossing out racist terms, but were not required to testify under oath.
Committee Chair Matt Hall, a Michigan Republican, overruled a Democratic colleague’s request to swear in Giuliani, who later called Detroit — a majority-Black city — “one of the most corrupt cities in America.”
Hall would feel compelled to intervene at other points in the evening. He stepped in multiple times with freelance IT worker and Trump campaign witness Melissa Carone, who slurred her way through a series of lies about fraudulently tabulated votes while berating a stoic Republican lawmaker.
Carone had previously made a number of recent appearances in right-wing media, in one interview stunning even Fox Business host and election denier Lou Dobbs with claims that ersatz ballots had been smuggled inside food vans. A Wayne County district judge later deemed Carone’s allegations “simply are not credible.”
But Carone’s erratic exchange with Republican Rep. Steven Johnson immediately went viral on social media, with a multitude of observers — including supporters — speculating about her sobriety. At one point, Giuliani shushed her and grabbed at her arm. By late Thursday afternoon, one clip being circulated on Twitter had racked up more than 15 million views.
“The poll book is completely off,” Carone said. “Completely off.”
“Off by 30,000?” Johnson asked.
“I’d say that poll book is off by over 100,000. That poll book — why don’t you look at the registered voters on there? How many registered voters are on there?” Carone challenged. “Do you even know the answer to that?”
“No,” Johnson replied. “I’m trying to get to the bottom of this.”
“Zero. Zero,” Carone replied. “There’s zero.”
“What about the turnout rate?” she continued, as Giuliani leaned over to tug her arm in an apparent effort to get his witness back on track.
Carone did not seem to notice: “120%?”
“Let’s let Rep. Johnson ask his question,” Hall said, after which Carone laughed.
When Johnson told Carone the tabulations were not off by 30,000 votes, she accused the state legislature of monkeying with the books.
“What’d you guys do? Take it, and ah, do something crazy to it?” she challenged as she bit her bottom lip and hiked her eyebrows.
“The numbers aren’t off by 30,000,” Johnson responded.
“I know what I saw. I know what I saw,” Carone said.
“And I singed something saying that if I’m wrong, I can go to prison,” she added. “Did you?”
Hall again interposed on Johnson’s behalf.
“Don’t interrupt him,” he told Carone. “And if you want to answer him — that’s fine.”
“I just want to keep following up with the poll book,” Johnson said. “Is it either wildly off — or are they filling in names?”
“Wildly off,” Carone said. “It’s wildly off, and dead people voted and illegals voted. So that’s my answer.”

Holy smokes the sequel is even better!

Rudy Giuliani tries to shush her to calm her down and the Republican even tries to reel her in!

She treats this Republican* like he’s a Chick-fil-A employee and the milkshake machine went down.

Carone also alleged that threats from Democrats had forced her to close her social media accounts, but as of Thursday, her Facebook page was active and featured dozens of publicly viewable posts. She later added that she was not working with Giuliani but rather another attorney. At the end of her time, Giuliani distanced himself.
“For the record, I met her for the first time today,” he volunteered. “Talked to her for the first time yesterday.”
Carone was followed by a naturalized American citizen from India, who had worked as a Republican poll watcher in Detroit on Election Day. Her argument for strict voter ID laws was met with fierce backlash after she described all Chinese people with a racist epithet.
“And the fact that now — as the other representatives said — you can actually show up and vote without an ID. It’s shocking. How can you allow that to happen?” she said. “Like, a lot of people think all Indians look alike. I think all Chinese look alike. So how would you tell? If some Chow shows up, you can be anybody and you can vote. And if somebody with my name — you can’t even tell my name — anybody can vote on my behalf. So ID should be the basic requirement.”
Giuliani, for his part, urged state lawmakers to “take back your power” and ignore the state’s already certified election results. He called President-elect Joe Biden’s 154,000-vote victory in the state a “complete falsehood.”
“Look, the people who certified your election — what are they worth?” Giuliani asked.

But courts have ruled against Trump and his allies in every lawsuit alleging voter fraud that the attorneys have not withdrawn themselves — though the campaign still holds out hope for appeals, including Michigan.
The day before the hearing, Attorney General William Barr told the Associated Press that a Department of Justice investigation had not found evidence of irregularities which would overturn the results of the 2020 election.
“To date, we have not seen fraud on a scale that could have affected a different outcome in the election,” Barr said.
Giuliani and Trump campaign legal adviser Jenna Ellis shot back in a statement.
“With the greatest respect to the Attorney General, his opinion appears to be without any knowledge or investigation of the substantial irregularities and evidence of systemic fraud,” they wrote.