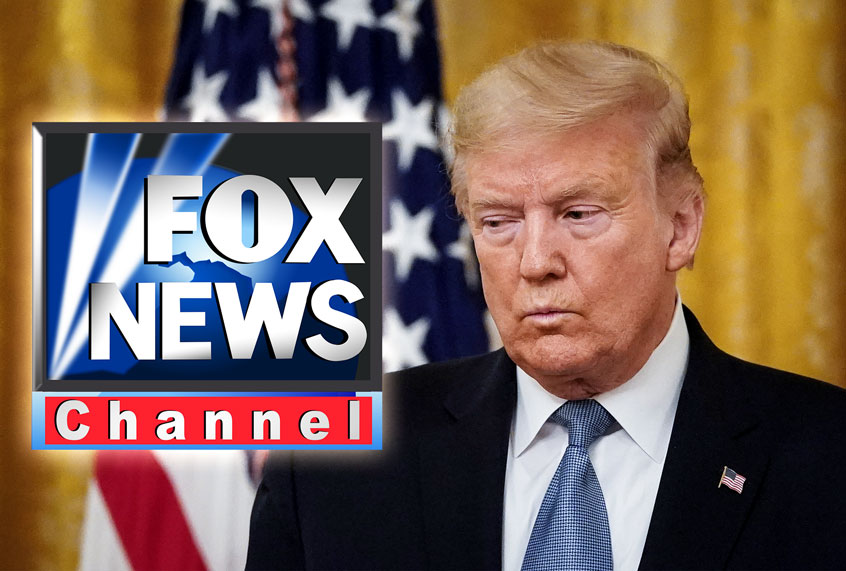 President Donald Trump complained about Fox News’ weekend coverage on Sunday before urging viewers to switch over to the even more adamantly pro-Trump outlet One American News Network (OANN).
Though Fox News’ opinion lineup has been compared to North Korean state TV for heaping dubious praise on Trump and echoing his talking points for years, the president has repeatedly groused about the network’s “news” side for presenting a less rosy view of his administration, seemingly as a way to pressure the network into more favorable coverage.
“Fox News is not watchable during weekend afternoons. It is worse than Fake News @CNN,” Trump tweeted on Sunday. “I strongly suggest turning your dial to @OANN. They do a really ‘Fair & Balanced’ job!” he added, quoting Fox News’ retired motto.
OANN is the low-rated, blatantly pro-Trump outlet which Mother Jones recently described as filled with “propagandists and conspiracy theorists” with a “willingness to do stories without a factual basis.”
“OAN has been around since 2013, but it didn’t truly find its reason for being until the channel’s lord and master Donald Trump took office in 2016,” Salon’s Melanie McFarland wrote last year. “Since then, OAN has been the main outlet for the Trump congregants who are refusing to buy the fake news the rest of the lamestream media is peddling.”
Though Trump has touted OANN in the past, his criticism of Fox News drew skepticism given that the rest of his Twitter feed is also filled with clips from Fox News.
“‘Fox News is not watchable during weekend afternoon,’ says president who watches and live tweets Fox News every single weekend afternoon,” Mother Jones’ Ben Dreyfuss quipped.
Hours after the tweet, Trump appeared on “Fox & Friends” to push debunked conspiracy theories about mail voting.
“I have to tell you that if you go with this universal mail-in . . . tens of millions of ballots being sent to everybody and their dogs. Dogs are getting them, OK? People that have been dead for 25 years are getting them. You have to see what’s happening,” Trump falsely claimed without any pushback from the panel of Fox News hosts.
Though most states require voters to request a ballot, a few states have opted to send ballots to every registered voter. These ballots have extensive fraud prevention safeguards in place, including signature verification, in order to prevent individuals from casting ballots which do not belong to them.
When asked how he was preparing for the upcoming debates against presumptive Democratic nominee Joe Biden, Trump also falsely claimed that he won every debate poll in 2016.
“By working very hard . . . not on debates but on running the country,” Trump said. “Honestly, what I’m doing is — I’m doing my job. My job . . . that’s the best debate prep . . . I guess I’ll do some preparation, but I didn’t so much last time because I understand what’s happening.”
As CNN fact-checker Daniel Dale pointed out, Trump only won “non-scientific polls on media websites that allow supporters to flood them with clicks.”
“He lost the scientific polls” on all three debates with Clinton, he added.