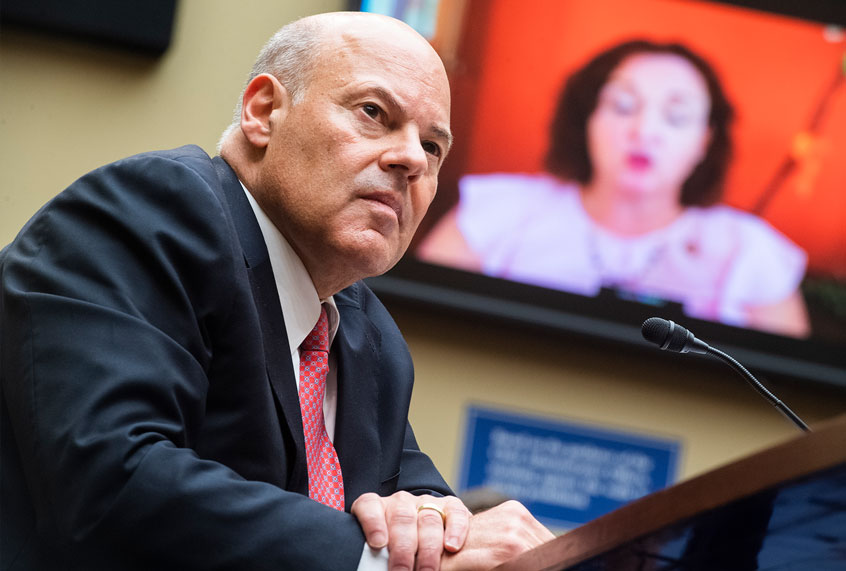 A top U.S. Postal Service official warned the agency’s leaders on Thursday that “supply chain” issues may prevent voters from getting their ballots on time, according to a recording to a meeting obtained by The Daily Beast.
A senior USPS official told agency leaders, including Postmaster General Louis DeJoy, printing services used by states may not be able to meet the demands ahead of an expected surge in mail-in voting amid the coronavirus pandemic.
“With the dramatic increase of ballots compared to previous elections, in some cases a tenfold increase in the number of ballots in some states, there are some issues in the supply chain,” the official said, according to the report. “Some of these printers… just don’t have the capacity they were used to in prior elections.”
“Despite the heroic efforts I know you guys will pursue to get that ballot in the hands of voters,” the official told colleagues, “the reality is, that’s going to be a difficult situation for that voter to have their vote counted.”
At least one official present at the meeting dismissed the warning about the supply chain to the Daily Beast as a “cover for leadership’s failures.”
Policy changes implemented under DeJoy, a top Trump and Republican Party donor who took over the agency in June, have been blamed for a nationwide mail slowdown that threatens to impact the unprecedented number of expected mail-in ballots this fall. The USPS recently warned 46 states that it may not be able to process ballots in time to ensure they are counted.
USPS spokesman David Partenheimer told the Daily Beast that issues with the supply chain are the responsibility of state officials but said that the agency “does work to assist and educate ballot producers in their mail piece design.”
“The Postal Service will continue with these efforts, but it is unrelated to the Postal Service’s complete readiness to deliver any Election Mail that is presented to us, and we will do so in a timely and secure manner consistent with our longstanding processes and procedures that we have utilized for years,” he said.
DeJoy and other officials cast blame on state officials during the meeting for “complicating” mail voting efforts, according to the report.
The officials also acknowledged that the controversial recent moves under DeJoy had left the agency open to allegations of politicization. Democrats have alleged that DeJoy is trying to tip the scales for Trump, who has repeatedly railed against mail voting over debunked conspiracy theories about the security of mail ballots. There is extensive evidence showing that mail voting is safe and secure.
DeJoy complained about the “political rhetoric” aimed at the agency and urged officials at the meeting to “be strong on our message,” according to the report.
“We were very assiduously trying to avoid becoming a political football,” another official said. “As you can tell, we were not wildly successful in that regard.”
One official said the group, which is a newly created task force, needed to meet more frequently to discuss these pressing matters.
“There’s no reason we shouldn’t be meeting once a week on something of this importance,” the official said. “Hopefully [we’re] talking on a daily basis [to] make sure everything runs smoothly.”
“Generally, the feeling is that DeJoy doesn’t know what he’s doing, and his senior staff is not managing him,” a USPS official told the Daily Beast.
Officials at the meeting also discussed a mailer that would be sent to all homes to urge voters to cast their ballots as early as possible.
“The Postmaster General has made it clear that we are ready to deliver for the November election and are committed to fulfilling our role in the electoral process when public policy makers choose to utilize us as part of their election system,” Partenheimer told the outlet.
DeJoy has faced growing scrutiny on Capitol Hill after he testified to lawmakers last month that he would not roll back changes that have upended mail delivery despite vowing to pause further changes until after the election.
House Democrats issued a subpoena to DeJoy earlier this week after saying he “has not produced a single additional document” requested by lawmakers during the hearings.
“Hundreds of Members of Congress have requested information and documents from DeJoy regarding widespread delays in mail, medications, and other critical supplies, potential delays for election mail in November, previously undisclosed communications between DeJoy and the Trump campaign, anomalies in the process used to select DeJoy, and other matters,” the House Oversight Committee said in a news release. “Although DeJoy and his aides initially downplayed the extent and gravity of these delays, headlines from states across the nation—and internal Postal Service documents obtained by the Committee—have made clear that these delays are far worse than previously disclosed.”