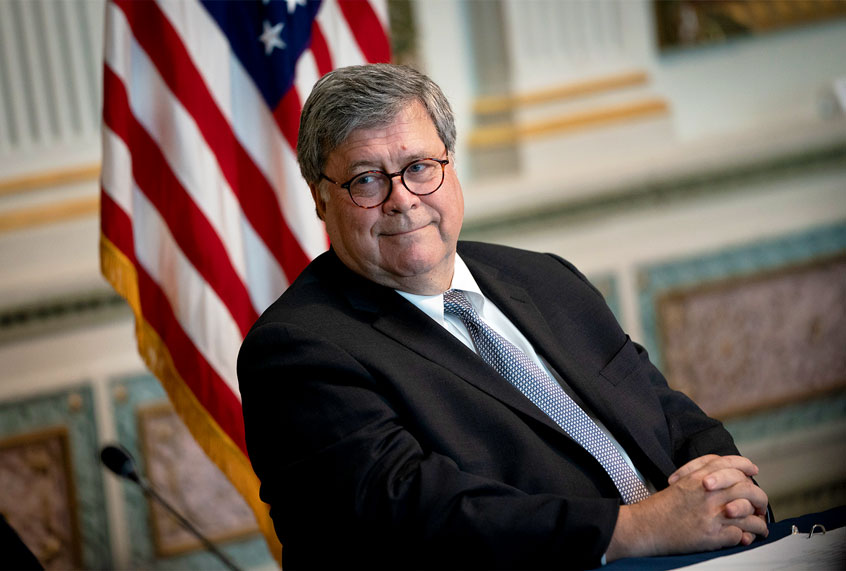 Attorney General Bill Barr’s decision to abruptly replace a career official who led a Justice Department office that oversees the legality of national security policy with a political appointee sparked concerns among national security officials, according to ABC News.
Deputy Assistant Attorney General Brad Wiegmann, a 23-year-old career official who headed the DOJ National Security Division’s Office of Law and Policy, was told that he was being reassigned two weeks ago, according to the report.
Wiegmann was replaced with Kellen Dwyer, a 36-year-old cyber-crimes prosecutor who joined the DOJ six years earlier. Dwyer previously made headlines in 2018 when he accidentally revealed secret charges that had been filed against WikiLeaks founder Julian Assange.
“It’s very alarming,” Katrina Mulligan, who served under Wiegmann, told ABC news, adding that Dwyer’s limited experience made him a “very odd” choice to replace an official she described as an “exceptional” manager.
The Office of Law and Policy is charged with ensuring that federal counterintelligence and counterterrorism activities don’t violate the law. Mulligan said the office is tasked with telling officials “what you want to do… is illegal” and then “try to offer them alternatives that weren’t illegal.”
The team is heavily involved in National Security Council meetings, conducts oversight of FBI intelligence-gathering, and helps congressional staff draft legislation.
“[It] has been sort of the center of gravity for the Department of Justice on national security policy, and it’s a central role,” Matt Olsen, the former director of the National Counterterrorism Center, told ABC.
Mulligan expressed concern that a political appointee would now have influence over policy regarding “what we will and won’t do overseas and at home” in terms of surveillance and when “it is and isn’t appropriate” for the DOJ to inform the public about election interference.
“The concern here is that you have someone who by all accounts has been doing a great job in a very sensitive role,” Olsen added, “[and] now within really just weeks of the election is replaced with somebody who is viewed more as a partisan.”
The Justice Department declined to say why Wiegmann was replaced.
“Brad doesn’t have a political bone in his body” and “has been such an uncontroversial person in that role for such a long time,” Mulligan told ABC, adding that he “was trying to advance the policies that this administration wanted to advance.”
Olsen said that given Barr’s efforts to intervene in matters related to President Donald Trump, the department does not “get the presumption of the doubt when it comes to making personnel decisions like this.”
A DOJ spokesperson told the outlet that Weigmann “continues to serve a vital role in the front office of the National Security Division,” adding that the office had been staffed by “political appointees and career staff since its inception.”
A current federal official pushed back on that claim.
“It would not have been that unusual early in an administration to place a political [appointee] in that policy role, but to do that now is very unusual,” the official, who spoke on the condition of anonymity, told ABC.
Barr has frequently been accused of politicizing the DOJ by intervening in criminal cases related to the president’s former advisers and echoing Trump’s baseless conspiracy theories about mail voting.
Those moves have raised fears among even Republicans that the DOJ may seek to influence the election.
“Barr has utterly and completely trashed the norm of DOJ separation from politics,” Donald Ayer, who served as the deputy attorney general under President George H.W. Bush, told The Intercept. “For the last several months, Barr has been fully engaged in using the tools of the Justice Department primarily for the purpose of advancing the president’s election prospects.”
Barr has also teased that the DOJ is trying to wrap up US Attorney John Durham’s investigation into the federal Trump-Russia probe “before the election” even though the department traditionally avoids making public information that could affect the race 60 to 90 days before the election. Former FBI Director James Comey infamously ignored that tradition when he made public statements about the investigation into former Secretary of State Hillary Clinton.
“It seems inevitable that Barr will attempt to unleash an October surprise through the Durham investigation,” former DOJ prosecutor Paul Rosenzweig told The Intercept.
“Given his past misrepresentations of the Mueller report,” added fellow former DOJ prosecutor Justin Levitt, “the American people should look very carefully and very skeptically at absolutely anything Barr announces this year.”