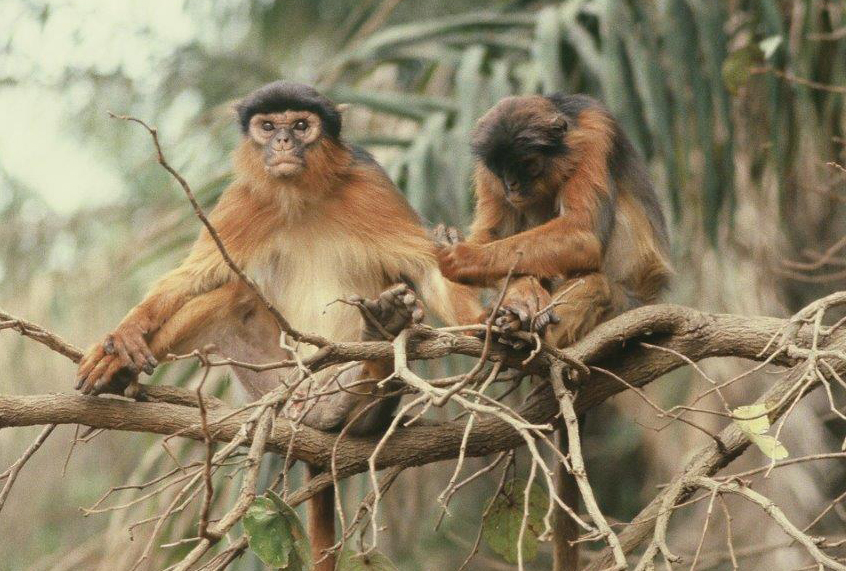 For years I spent my days, from before dawn until after dusk, following a troop of mostly arboreal, endangered western red colobus monkeys (Piliocolobus badius temminckii) around a small West African forest. For the most part, the simian soap opera taking place above my head involved domestic themes, like feeding on unripe fruits, young leaves and pieces of termite mounds; sleeping on the widest branches in the tallest trees; resting with family members and friends; and forming and maintaining alliances.
While each colobus troop consisted of a group of individuals, that associated together and shared a common home range, social groups within the troop often divided up and re-united into subgroups – sometimes for just a few hours, sometimes for days. On the whole this fluid fission-fusion type of social life was well organized and peaceful. But, as with many soap operas, from time to time life here became totally unfocused and utterly confusing. The plots—and there were many—looked familiar: sometimes sitcom, sometimes rom-com, sometimes melodrama, sometimes kill-’em-dead’ bloody action and sometimes high scary political drama. The characters, each with their own individual life histories and personas, had enough variety to delight any casting director. Ranging from timid to bold, calm, cool and collected to out-of-control, supportive to back-stabbing, compassionate to downright spiteful, it quickly became clear that we are not the only creature with individual personalities.
There was the smallest adult male, Captain Crook, a benevolent alpha male.  During his two-year reign as the highest-ranking male, he appeared to think along the lines of us and we and our. He was a favorite grooming partner, a hit with the females; unusually for a male, he played with infants and frequently groomed a young orphaned juvenile female.
Patient, confident, composed, socially skilled, adaptable and the possessor of what I can only describe as a fine political mind, Crook was able to sail himself and the troop through crises. Internal disputes amongst members were easily and quickly settled, home-grown crises were short-lived and stability was fairly well maintained. While he was the alpha male, there was little uncertainty and decisions appeared to be made for the good of the troop.
Crook and his amiable wingman, the gentle, counterintuitively-named, Mr. Mean, maintained a rather aloof relationship and yet had a stable, coordinated, cohesive bond when facing external threats.  Together they led the troop into battle during territorial skirmishes and their associates, cheerleading along the way, willingly followed. Their united front and their ability to mobilize collective action resulted in fewer lost territorial skirmishes with neighboring troops. They knew how to present themselves to the outside world. Like Teddy Roosevelt, metaphorically speaking, mostly they spoke softly and yet, when necessary, they also sometimes carried big sticks.
Was benign Crook, the popular, socially-skilled alpha male, the colobus equivalent of a respected, compassionate, empathetic president or prime minister?

When will the first baby be born in space?